While East Turkestan which is roughly the size of Iran possesses huge reserves of natural gas, oil, gold, uranium, coal and other minerals, the living standard of Uighurs is one of the lowest in China.  The Uighur population in East Turkestan, which was nearly 90 percent in 1949, is now only 45 percent, while the Chinese population grew disproportionately due to state-sponsored mass settlement from around six  percent in 1953 to the current 40 percent (excluding the Chinese military, seasonal workers and floating population).  Many Uighurs believe Chinese are already a majority since Beijing continues to encourage their settlement….
What is more, China tested 45 nuclear devices, both under and above ground, between 1964 and 1996 in East Turkestan, polluting air, water, land and slowly killing both people and livestock due to the effects of radiation.   https://www.aljazeera.com/indepth/opinion/2014/06/china-uighurs-claim-cultural-gen-20146165946224857.html
………………………………………………..……………….......................................…
11-28-18     Agents of the Russian Empire and later the Soviet Union were particularly aggressive in their attempts to assert control over the resource wealth of Xinjiang in the first half of the 20th century.  Soviet investments in surveys, extraction and processing equipment and transport infrastructure at a handful of sites in northern Xinjiang helped create a blueprint for state investment and economic planning that has been carefully followed by multiple generations of Chinese planners.
The most recent campaign, undertaken by Chinese planners over the past two decades and which has culminated with the BRI, has helped steer a steady flow of the region’s petroleum and natural gas to industrial centers in central and eastern China.  But the growing wave of Chinese capital has also helped create stark economic inequalities in Xinjiang.  The gap between north and south, indigenous Turkic-Muslim Uighurs and immigrant Han, has helped exacerbate ethno-cultural tensions in the region.  Eager to protect their growing investment in an integrated Central Asian production region, Chinese officials have constructed a new network of government-operated detention centers that today imprison up to one million Turkic Muslims….
Facing financial and political challenges that would continue well after the collapse of the Qing dynasty and the establishment of the Chinese Republic in 1912, officials in Beijing did little to stem the tide of foreign explorers in Xinjiang.  Benefitting from easy overland connections that bound Russian Central Asia to this province of China, explorers from Russia and later the Soviet Union flooded the region and confirmed long-whispered rumors about gold nuggets as big as a pigeon egg and patches of steppe where bubbling crude collected in sticky black pools…. 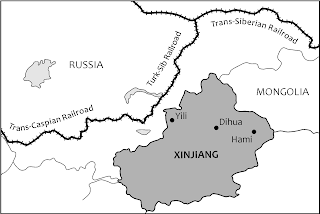 Debbie Newell
-The Trans-Caspian, Trans-Siberian, and Turkestan-Siberia (Turk-Sib) rail lines.
The Chinese government, which was facing its own challenges farther east, didn’t offer much support.   So in 1934 officials in Xinjiang reached out to their deep-pocketed neighbors to the west for support.   In a series of agreements with the Soviet Union, Xinjiang officials swapped favorable trade policies and access to the province’s tungsten, beryllium and petroleum for Soviet loans, military support and access to an on-going supply of manufactured goods.
Eager to stake a lasting claim to the resources needed to meet ambitious industrialization targets in the 1930s, Soviet planners invested heavily in a handful of sites in northern Xinjiang located close to major border crossings, including petroleum at Dushanzi, tungsten and tin at Bortala in western Xinjiang, and beryllium and other rare non-ferrous metals at Koktokay in the far north in the Altay Mountains…. After nearly a decade the relationship between Xinjiang and Soviet Union collapsed in 1942 following the German invasion of Russia and a commensurate slow-down in Soviet aid to the province.  Eager to roll back the Soviet position in Xinjiang and orient it more clearly to the east, officials in the capital of Dihua (present-day Urumqi) invited Chinese planners to tour the region in 1942.  But the material presence of the Soviet highway networks, drilling rigs and refining operations had a power that continued to resonate.
Chinese Communist Party (C.C.P.) in 1949 was able to extend direct political control over Xinjiang, but the resonances of the Soviet legacy continued.  Soviet technicians, geologists and engineers, many of whom had more than a decade of experience in Xinjiang, continued to play a critical role in petroleum and nonferrous metal production operations in the region.      Eager to quickly ramp up production of petroleum and other resources needed by the People’s Republic, Xinjiang’s new communist leaders adhered to the larger blueprints identified by Soviet planners in the 1930s and 1940s.  Soviet personnel and plans continued to shape operations even after the deterioration of Sino-Soviet relations in the late 1950s.  Relations collapsed in 1960….The closure abruptly severed the infrastructural connections that had helped create a unified, Central Asian production region.
Growing fears about a border clash, alongside the discovery of new resource production sites in Manchuria, helped orient C.C.P. planning away from Xinjiang.  After completing the Lanzhou-Xinjiang railway which connected Xinjiang to China’s national rail network in 1962, Chinese planners scaled back their ambitions and shelved various plans for the construction of a comprehensive infrastructural and extraction network in China’s far west. Instead throughout the Mao era and well into the post-1978 Reform Period, they largely followed Soviet blueprints and reinforced the investments in roads, refineries, pipelines and extractive operations first made by the Soviet Union in the 1930s and 1940s.
China’s demand for petroleum and petroleum products has increased steadily since the 1990s. And this growing demand has helped expand the map of oil fields in Xinjiang being prioritized by the state…. 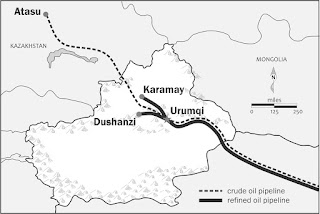 Debbie Newell
-Oil pipelines connecting Xinjiang to Eastern China and Eurasia. Source:  PetroChina.
The oil refinery of Dushanzi, which was constructed with Soviet capital in 1939, is now at the center of an expanding pipeline network that draws in raw crude from not only Xinjiang but also from fields located across the border in Kazakhstan.  The pipelines which are kept full by a series of agreements signed between China and the government of Kazakhstan in the early 2000s resemble the earlier agreements signed by Xinjiang and the Soviet Union, but in reverse:  offering Chinese loans in exchange for shipments of raw crude extracted from the Kashagan oil field in Kazakhstan.  Today Dushanzi is a critical node in China’s larger fossil fuel infrastructure, as it draws in petroleum from across Central Asia and redirects it via pipeline to industrial centers in eastern and central China.
The flood of state investment into Dushanzi and other resource-production sites in northern Xinjiang has helped exacerbate ethno-cultural tensions between indigenous Turkic-Muslim Uighurs and Han Chinese.  The state investments and the high-wage employment opportunities that these operations bring with them have helped create and exacerbate stark socio-economic inequalities in Xinjiang…The Xinjiang south, on the other hand, is home to counties that rank among China’s poorest. While the increasing demands for petroleum have led to a growth in oil and natural gas operations in the south, these operations, which rely heavily on immigrant Han labor and remain largely closed off from surrounding communities, have almost certainly done little to alleviate the problems of inequality….
A group of C.C.P. planners in the early 2000s recognized the negative impact of the unequal distribution of state resources in Xinjiang and its role in fomenting unrest.  In addition to a series of aggressive “strike hard” campaigns that sought to root out Uighur separatism, beginning in 2001 with the Great Open the West Campaign (Xibu Dakaifa), Party leaders implemented policies in Xinjiang that sought to spread state investment more widely…. The apparent failure of the strategy of redistributing state investment to ease ethno-cultural tension has empowered Party hardliners, who have long been critical of the policy.  For them Xinjiang’s so-called “ethnic problem” is, at its core, a cultural problem of separatism and religious radicalism that cannot be resolved through economic means.  In seeking to eradicate separatist sentiments that could potentially threaten Chinese control over the resources present in Xinjiang and also threaten the whole edifice of Xi Jinping’s Silk Road Economic Belt, government officials have sought to redirect state investment toward an unprecedented surveillance and assimilationist campaign in the region.  The effort employs a state-of-the-art surveillance regime that closely monitors the movements and communication of Uighurs and other Turkic Muslims, and also regulates clothing, the sale and consumption of alcohol and tobacco and the practice of Islam.  Even more troublingly, these campaigns have paralleled the construction of a growing network of “reeducation centers” and the indefinite detention of perhaps up to one million Turkic Muslims who have been identified as being insufficiently loyal to the Chinese Communist Party and a threat to the region’s so-called “ethnic harmony and social stability.”
As part of the media campaign surrounding the Silk Road Economic Belt, China’s leaders are now advancing a mythical vision of a silk road defined by “peace and cooperation, openness and inclusiveness, mutual learning and mutual benefit.” 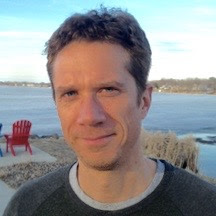