Therefore We have descended as the corridor [through the astral plane] has been cleared [by angelic hosts] and established [by the decrees of Keepers of the Flame]. Therefore We find room once again in the heart of a Messenger and of disciples becoming the incarnation of the Word of God of the first ray….
To be carnally minded is the death of the soul; to be spiritually minded is the eternal and everlasting Life and peace of the soul.  So let the soul be forewarned of the intimidations of this carnal mind not alone within the temple of her abode, not alone within the entity called self, but in fallen angels and others such as mechanization man who have developed that intellectual mind to such extents as to be able to intimidate and belittle that soul who is about to become the handmaid of her Lord, her Savior, her Holy Christ Self.
Though your souls have met their master in this [intellectual] mind in previous lifetimes only to awaken [after passing from the screen of life] to this realization [thence] to be caught up, even if momentarily, in the heart of the Divine Mother, your souls have reincarnated again and again only to be put down [by the same carnal mind] as though under the weight not only of the cross but of the tombstone itself.
Blessed ones, I give you then a gift and it is to your soul the cumulative self-awareness--as though [you were] reading the story of your life, of many scenes--of each and every time you have been traduced, for you have allowed yourself to be traduced by someone or another’s intellect and that carnally minded consciousness which is of the flesh and of the physical-mental functioning of the outer self.
Thus, beloved, my gift is the cumulative awareness, the discernment [of the whys and wherefores of your soul’s meanderings through the labyrinth of the carnal mind] and what your Teachers and the Great Gurus have taught you concerning [life’s journey], those lessons learned and then forgotten.  This is a wise gift recommended by Solar Logoi, for if We may not carry all of your burdens, We may give you the most expedient means for you to rise beyond the entanglement with the not-Self and the not-Self reasoning, [thence to eliminate the cause of the burden].
You shall then be tutored by angels of Jophiel’s band.  You shall receive illumination.  You shall no longer be naive or sleepful or slothful or allow yourself to take on the robes of [the] over-self-confidence of the ego mind.  But you shall understand that you are an identity in God, yet a shorn lamb, but not all.  And you are rising step by step, coil by coil up that pole of being….
Mount [up] as with eagle wings but do not skip steps.  For each step though difficult is the steppingstone to the next and you need a sound and firm foundation in order to meet the challenges of the next.  Some listening then to the intellect have cleverly skipped those steps, or so they thought or so they made it appear to others.   Lacking the roots and the grounding or the humility to begin again and to begin again and to begin again where there is a weakness in the building, they have positioned themselves as though standing on air instead of [on] terra firma and upon the Rock of Christ.
Blessed ones, an attainment truly won even if it be the first step will not be taken from you by any, not through the ravages of astrological cycles or of clever thieves in the night.  A step of attainment truly won can become the white stone and the white cube and even the chief cornerstone in the temple.
Fear not to perfect the first step.  Fear not to go back.  Fear not, for you build for eternity, and each stone you carve is a steppingstone to the Central Sun.  You create your path stone by stone which you then walk upon as star to star the markers of the homeward journey point the way to the heart of Alpha and Omega, to your Christ, my Christ. …


I speak to the wise, the strong and the loving.  To bring back El Morya to your side you now must become him as intercessor, not alone for the reasons declared but because when the hour comes for the consideration of his return to the frontlines midst his chelas he must gather those who have sustained his Electronic Presence and present all to the Lords of Karma and the Cosmic Council.  And it is by you that he shall return to the place he loves most:  to the heart and soul and mind of his chelas.       -Elohim Hercules:  10-10-1988 at Royal Teton Ranch, Montana 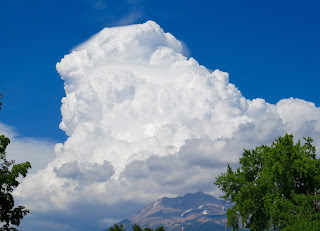