Radio/Microwave Wave changing weather pattern
The theory in a nutshell
Some say that microwaves used by wireless, radar, mobile, and satellites are so weak that they could not affect the world. This is somewhat true.  The “Broadcast” or “Global Microwave” theories are not trying to fool you into thinking the world is melting because of intense heat generated by the waves.
The theory in a nutshell is that the constant wave bombardment effects the natural pattern and flow of the earths atmosphere.  The heating and molecular friction caused by RF and microwave frequencies cause erratic weather patterns.  The “Broadcast” and “Global Microwave” theories introduce many different concepts that most “Global Warming ” and “Climate Change” advocates do not consider. The Depth of the theory involves the use of all microwaves in general across the world from cell phone towers, radar systems, GPS, weather stations, HAARP and more.  The impact ranges from personal health, the pollution of the earth, global weather to the entire aspect of life on earth.  It is worthwhile to consider this view of “Climate Change” and “Global Warming.” 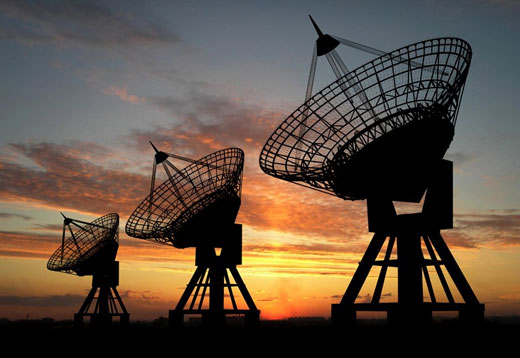 Microwave Radio Frequencies dominate the Earth with millions of subscribers.  Since the late 1950’s Microwave Radio Frequencies have become the dominant form of communication for TV’s, Cell Phones, Weather Stations, and a host of others uses.  Each of these companies having MILLIONS OF SUBSCRIBERS!  Satellite transmitters and Earth antennas transmit UHF and higher microwave frequencies all over the planet.  Just like a Vacuum tube in old electronic technology, microwaves are insulated by the vacuum of space.  Because the vacuum of space acts as an insulator, microwave radio frequencies are scattered through our atmosphere at an accelerated rate.
The Earth is a rotating electromagnetic field containing a dielectric material called water.  Sending oscillating microwave radio frequencies through an electromagnetic field into a dielectric material, such as water, creates radio frequency heating (also called RF heating) at the molecular level of water.  Because Earth’s electromagnetic field points directly towards the North Pole and the Earth’s atmosphere is circulating through ordinary convection towards the North pole, the RF and Microwave transmissions are guided directly towards the Polar Ice Caps.  This is causing erratic weather patterns which in turn effect the Polar Ice caps.
Since our atmosphere is made of water and the Earth is covered with water and ice, microwave radio frequencies pass through our atmosphere, oceans and ice caps.  Because the wattage levels are minimal, weather change is caused by a constant flow of waves that are never turned off.  “Global Warming” or “Climate Change” is exacerbated by the mass use of artificial satellites and the use of microwave radio frequencies.  The industrial Revolution happened at the beginning of the 1800’s.  Yet in the late 1950’s is when Global Warming or Climate Change became an issue.  We can see that “Global Warming” or “Climate Change” only became an issue with the mass use of radio and microwave frequencies. …
The below image demonstrates how microwave transmissions work with the environment.  Microwaves scatter THROUGH the atmosphere whereas solar radiation does not.  As the microwaves penetrate to the surface the water, ice, and atmosphere have microwave frequencies passing through them.  This causes friction in the ice and water at the molecular level.  This friction causes heat which is called Radio Frequency Heating.  This is the basic principle behind the Microwave Oven. 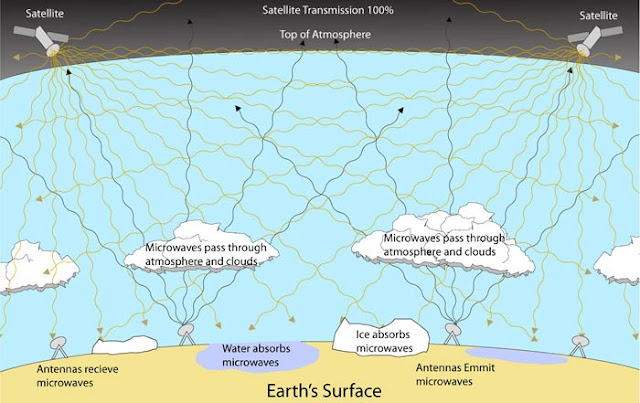