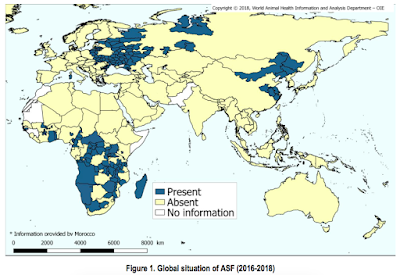 (Due to poor hygiene in pig farms, African swine fever—a DNA virus— is) spreading through Angola, Belgium, Benin, Bulgaria, Burkina Faso, Burundi, Cabo Verde, Cameroon, Central African Republic, Chad, China, Democratic Republic of Congo, People's Republic of Congo, Cote D'Ivoire, Czech Republic, Estonia, Gambia, Ghana, Guinea-Bissau, Hungary, Italy, Kenya, Latvia, Lithuania, Madagascar, Malawi, Mali, Moldova, Mozambique, Namibia, Nigeria, Poland, Romania, Russia, Rwanda, Senegal, South Africa, Tanzania, Togo, Uganda, Ukraine, Zambia, Zimbabwe.
http://www.oie.int/fileadmin/Home/eng/Animal_Health_in_the_World/docs/pdf/Disease_cards/Report_1._Global_situation_of_ASF_Updated_191018.pdf
…................................................................
Reddening of the ears is a common sign of African swine fever in pigs.  This virus appears to have evolved around 1700 AD….The disease remained restricted to Africa until 1957, when it was reported in Lisbon, Portugal. A further outbreak occurred in Portugal in 1960. Subsequent to these initial introductions, the disease became established in the Iberian peninsula, and sporadic outbreaks occurred in France, Belgium, and other European countries during the 1980s. Both Spain and Portugal had managed to eradicate the disease by the mid-1990s through a slaughter policy.[12]…
African swine fever had become 'endemic' in the Russian Federation since spreading into the North Caucasus 'in November 2007, most likely through movements of infected wild boar from Georgia to Chechnya, said a 2013 report by the Food and Agriculture Organization, a United Nations agency…. 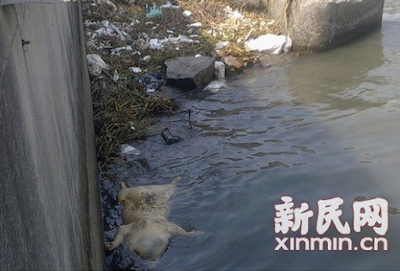 3-11-2013  In fact, waste related to animals made up about 90% of organic pollutants in China’s water, according to Wang Dong of the Chinese Academy for Environmental Planning. In a 2012 study from Huazhong University, waste from pigs, cattle, sheep, and other animals left 228,900 tonnes (252.6 tons) of biochemical oxygen demand, a standard measure for organic pollution, in part of the Han River in central China.  Now, about 15% of China’s major rivers are too polluted for safe use, not just from local factories, but farmers who throw animal carcasses and waste into nearby streams.
Chinese residents are well aware of the country’s water pollution problems.  A Chinese businessman recently offered a local environmental official 200,000 yuan ($32,000) to swim in a dirty river in Zhejiang province.  The issue caught fire last month when investigative journalist Deng Fei invited people to post photos on Sina Weibo of polluted waterways in their hometowns.
And the health consequences of this trend can be severe . For example, in 2011, a farm was found throwing duck excrement into a river in Henan province, giving thousands of people diarrhea.  But while Shanghai authorities are still investigating the source of the dead-pig spill--which some Shanghai residents proposed calling “hog wash“--Chinese officials say there’s no sign of any disease outbreak from the floating porkers.  Porcine circovirus, the suspected culprit in the mass pig death, is probably harmless to humans, they say.  https://qz.com/61280/2800-dead-pigs-just-another-example-of-the-waste-that-pollutes-chinas-waterways/
.........
2-26-2006  DAVIDSON:  Bob Waters is SSA Vice President. And let me repeat what he just said:  the biggest U.S.-owned terminal operator manages seven terminals. The next biggest?  That's Maher Terminals, in Elizabeth, New Jersey.  They manage one terminal. Waters says about a dozen are managed by city or state governments.

Mr. WATERS:  Other than that, the rest of the terminals, which comprises about 80 percent of those terminals we're talking about, are operated by foreign entities, primarily shipping lines.
DAVIDSON: So United States companies have eight, foreign companies have 80.  Those companies managing U.S. terminals are all over the world, in China, Denmark, Singapore, South Korea.  https://www.npr.org/templates/story/story.php?storyId=5234177
Posted by Bob Dinn at 10:45 AM