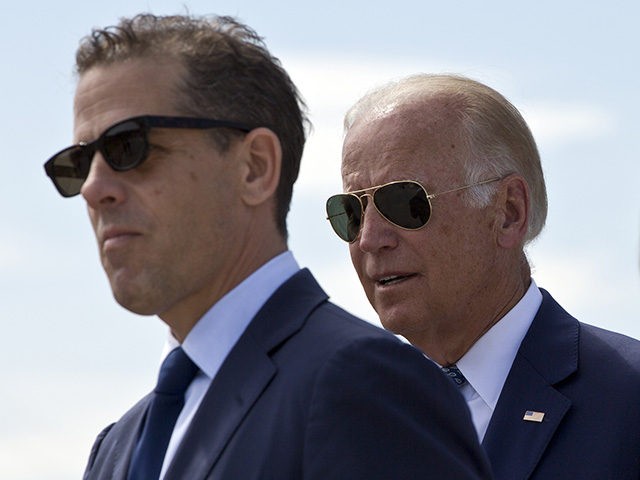 3-15-2018   The private equity firm of former Vice President Joe Biden’s son Hunter Biden inked a billion-dollar deal with a subsidiary of the Chinese government’s Bank of China just 10 days after the father and son flew to China in 2013.
The Biden bombshell is one of many revealed in a new investigative book Secret Empires: How the American Political Class Hides Corruption and Enriches Family and Friends by Government Accountability Institute President and Breitbart News Senior Editor-at-Large Peter Schweizer.


In December of 2013, Vice President Biden and his son Hunter flew aboard Air Force Two to China….Hunter Biden was the principal of Rosemont Seneca Bohai….Joe Biden has yet to comment on how the firm of a sitting vice president’s son was permitted to bag a billion-dollar deal with the Communist Chinese government—nor whether they had any knowledge or involvement in the deal.       https://www.breitbart.com/politics/2018/03/15/secret-empire-joe-biden-john-kerry-billion-dollar-deal-chinese-government/
....................................
“Foreign governments and oligarchs like this form of corruption because it gives them private and unfettered gateways to the corridors of Washington power,” Schweizer writes. “Foreign entities cannot legally make campaign contributions, so using this approach creates an alternative way to curry favor and influence America’s political leaders.  Simply camouflaging these transactions as business agreements provides another shield of plausible deniability.”
As Schweizer tells it, the Chao family fortune derives from the Foremost Group, a shipping company that Chinese native James Chao, a classmate of former Chinese president Jiang Zemin at Jiao Tong University, founded in New York in 1964.  Chao remains Foremost’s chairman today, and his daughters Angela and Christine are the company’s deputy chairwoman and general counsel, respectively.  Elaine Chao worked there in the 1970s, and has been quoted as saying “Shipping is our family tradition.”
The success of Foremost is largely due to its close ties to the Chinese government, in particular the China State Shipbuilding Corp. (CSSC), a corporation with which Foremost has done “large volumes of business.”
The CSSC, Schweizer writes, is “a state-owned defense conglomerate … at the heart of the Chinese government’s military-industrial complex.”  The main goal of the CSSC is to strengthen the Chinese military.  James and Angela Chao have both sat on the board of a CSSC offshoot.
While Foremost is an American company, “their ships have been constructed by Chinese government shipyards, and some of their construction financed by the Chinese government.”  In addition, writes Schweizer, “their crews are largely Chinese,” despite US Transportation Secretary and company founder’s daughter Elaine Chao having once said that “ships crewed by Americans are ‘a vital part of our national security.’”    Given all this, it’s worth noting how both Sen. Majority Leader McConnell and Chao in their roles as high-ranking US officials have personally interacted with, and then gone considerably soft on, China since their 1993 wedding. 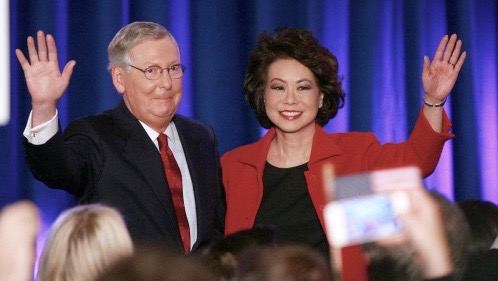