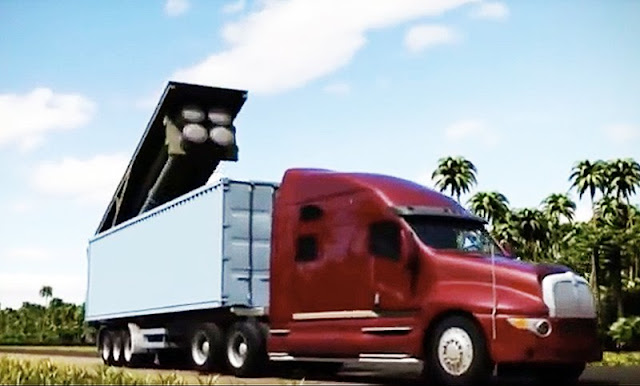 After Gulftainer and Rostec struck their joint venture, Gulftainer quietly started looking for U.S. container terminals located near U.S. Navy submarine bases.  In 2014 Gulftainer signed a lease with Port Canaveral.
Smuggling Club-K cruise missile units from Russia and into the U.S., through ports like Port Canaveral, will provide shippers with the ability to transport box containers throughout the U.S. via truck or train systems....
Gulftainer is a subsidiary of UAE-based conglomerate The Crescent Group, owned by the oil-wealthy Iraqi Jafar family.
The Jafar family is a powerful Shia dynasty with deep connections to Iraq, Iran, and Russian intelligence operatives. Baghdad-born brothers Hamid Jafar, Chairman of The Crescent Group, and his nuclear physicist sibling Dr. Jafar Dhia Jafar are major Iraqi WMD players.
Soviet-trained Dr. Jafar designed a compact spherical nuclear weapon...Russian Technologies is the joint venture between Gulftainer and Rostec, along with Rostec’s investment bank Prominvest.  Prominvest is under U.S. sanctions and was added to the Treasury Department’s Specially Designated Nationals (SDN) list in 2015.  Gulftainer’s Port Canaveral lease prohibits the company from doing business with SDNs.
Gulftainer entered into its joint-venture with Rostec in 2010, the same year during which Russian state-owned naval weapons developer Concern Morinformsystem-Agat began marketing its Club-K system with a computer-animated video, and one year after Rosoboronexport became part of Rostec.
Under the joint venture, Gulftainer operates the YUG-2 multi-purpose cargo terminal at Russia’s Port Ust-Luga and is leading the development of the port according to “Port Strategy.”  Reuters reported that Gulftainer bought a 25% ownership stake in Port Ust-Luga, which is located on the Baltic Sea near St. Petersberg.  Gulftainer reportedly invested $275 million in Port Ust Luga.
Ust-Luga is one of twelve ports in Russia that berths ships carrying nuclear materials.
https://www.commdiginews.com/politics-2/gulftainer-joint-venture-russia-club-k-missile-95476/
.................................................................................
Hewson estimated the cost of the Club-K system, which packs four ground or sea-launched cruise missiles into a standard 40-foot shipping container, at $10-20 million.  “Unless sales are very tightly controlled, there is a danger that it could end up in the wrong hands,” he said.
“This Club-K is game changing with the ability to wipe out an aircraft carrier 200 miles away.  The threat is immense in that no one can tell how far deployed your missiles could be,” Hewson told the Telegraph’s Thomas Harding.  “What alerted me to this was that the Russians were advertising it at specific international defence event and they have marketed it very squarely at anyone under threat of action from the U.S.”
Reuben Johnson, a Pentagon defense consultant, told Harding the system would be a “real maritime fear for anyone with a waterfront.  This is ballistic missile proliferation on a scale we have not seen before because now you cannot readily identify what’s being used as a launcher because it’s very carefully disguised. Someone could sail off your shore looking innocuous then the next minute big explosions are going off at your military installations.”...
Russia is one of the world’s top arms exporters, selling a record $8.5 billion of weapons last year to countries ranging from Syria and Venezuela to Algeria and China.  Its order book is estimated to top $40 billion.
Mikhail Barabanov, a defense expert at Russia’s Center for Analysis of Strategies and Technologies (CAST), said that as far as he understood, the Club-K was still at the concept stage.  “Potential clients include anyone who likes the idea,” he said. “It is known that the United Arab Emirates has shown interest in buying the Club.”
Barabanov said the Club-K used proven missiles from Novator, an established Russian maker of weaponry including anti-submarine, surface-to-air, and submarine-launched missiles.
One of the missiles on offer is a special anti-ship variant with a second stage which splits off after launch and accelerates to supersonic speeds of up to Mach 3. “It’s a carrier-killer,” said Hewson of Jane’s.  “If you are hit by one or two of them, the kinetic impact is vast…it’s horrendous.”  http://www.homelandsecuritynewswire.com/new-russian-weapon-system-hides-missiles-shipping-container?page=0,1
........................................................................
6-9-2017   Rubel suggests an alternative—ready-to-go missile containers that can go practically anywhere.  The Navy could even plop them down on islands, which have always played an important role in shaping the contours of naval campaigns.
“If missiles are housed in a box launcher or a modified shipping container, they could be placed on almost any kind of ship,” Rubel writes.  “If the missiles are capable of being launched on remote command, the host vessel may not need to support them in any way other than an electrical power feed.  This means that virtually any vessel could be a missile shooter.”
These drop-in, pop-up launchers have appeared sporadically.  Russia has developed a version of the Club-K anti-ship missile—which has a greater range than the Harpoon—with the launchers camouflaged inside a shipping container.
Rubel argues that the Navy should adopt a similar practice by adding container launchers to ships, and having helicopters fly fresh containers after they run dry.  It’s faster than sending the ship back to port to rearm, thereby allowing a fleet to keep up the volume of missiles—while presenting more foes for an enemy to deal with.
“Such a capability not only would distribute combat power—complicating enemy targeting and permitting graceful force degradation—but also would simplify combat logistics,” Rubel writes.
In short, a Navy doesn’t strictly need every combatant to be a purpose-built fighting ship.  It needs to outgun an enemy at long range—and it needs the sensors and reconnaissance assets to detect them.  Finally, the warships in combat need to be networked, as being able to see an enemy, and communicate where the enemy is to friendly vessels, will be key to determining the outcome of a battle.
Regardless, navies should anticipate that enormous numbers of missiles will be fired in a future naval war, with the goal of overwhelming a foe’s defenses.  https://nationalinterest.org/blog/the-buzz/ready-go-missile-containers-the-slick-idea-could-give-the-us-21104
............................................................................................................. 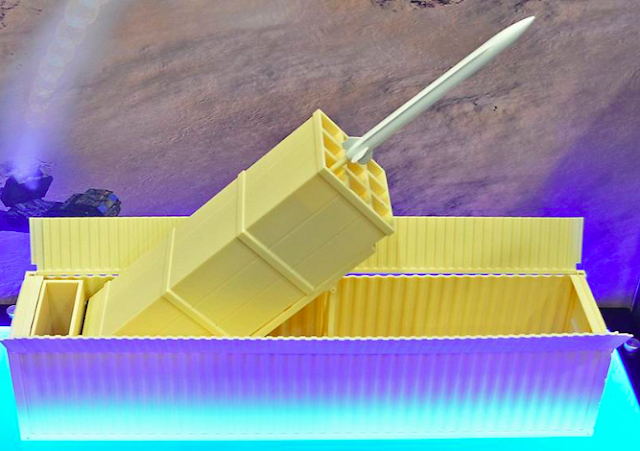 10-8-2018  Eventually, Harpy suicide drones and their successors replaced Keres and the land-based anti-radiation missile concept in IDF service, but in some ways, it is still alive today. In this day and age, Israeli ground-launched cruise missiles get fed coordinates of active enemy radar systems and are fired at those sites on short order. These cruise missiles, such as the ground-launched Delilah, lack the speed of their anti-radiation predecessors. Now, Israel also has an evolved series of guided artillery rockets that are very fast, but not as long-ranged, and they don't possess the ability to chase down active emitters or moving targets.
Yet what makes this concept most exciting is its modularity and deployability. It can be strapped to the deck of a ship, carted around by a semi or flatbed truck, or get airlifted into a remote firebase. It could even potentially be hidden aboard a vessel masquerading as a civilian transport, ready to provide fast-reacting suppression of enemy air defenses capabilities in support of an incoming aerial assault. Because it uses a standard ISO container, under very certain circumstances the system could even potentially be snuck into enemy territory, or into a less hostile country that shares a border with it, and be used by surprise to kick-down the enemy's air defenses ahead of or during an air operation—all without even putting an aircraft at risk.
Using this system during a ground operation in contested territory could help significantly with providing protection for Army helicopters and other lower-flying assets from pop-up radar-guided anti-aircraft artillery and road-mobile SAM systems.
The containerized weapon system concept began to emerge about a decade ago and has steadily become an increasingly attractive and versatile deployment concept for both higher-end and lower-end combat capabilities. Russia, in particular, has embraced the idea and is now designing entire ships around it.The U.S. seems to be following suit, albeit slowly.   https://www.thedrive.com/the-war-zone/24111/northrop-grumman-shows-off-shipping-container-launched-anti-radiation-missile-concept
................................................................................................................
4-26-2010  MOSCOW (Reuters) - A Russian company is marketing a devastating new cruise missile system which can be hidden inside a shipping container, giving any merchant vessel the capability to wipe out an aircraft carrier.
Potential customers for the formidable Club-K system include Kremlin allies Iran and Venezuela, say defense experts. They worry that countries could pass on the satellite-guided missiles, which are very hard to detect, to terrorist groups.
“At a stroke, the Club-K gives a long-range precision strike capability to ordinary vehicles that can be moved to almost any place on earth without attracting attention,” said Robert Hewson of Jane’s Defense Weekly, who first disclosed its existence.
A promotional video for the Club-K on the website of Moscow-based makers Kontsern-Morinformsistema-Agat shows an imaginary tropical country facing a land, sea and air attack from a hostile neighbor. https://www.reuters.com/article/us-russia-weapon/deadly-new-russian-weapon-hides-in-shipping-container-idUSTRE63P2XB20100426
.......................................................................................................................... 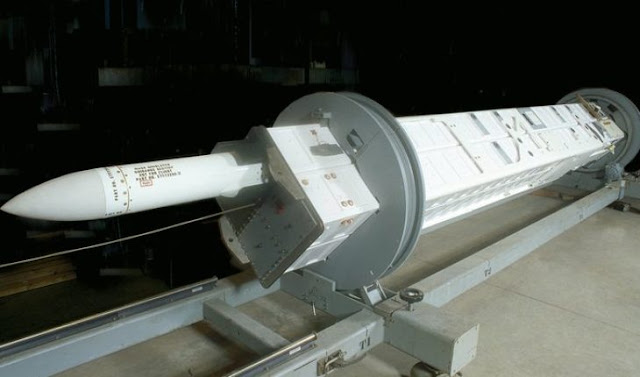 1-11-2019  The US Navy is considering converting available merchant ships into missile-armed Navy ships.  They would be able to make 15-20 merchant ships for the cost of one destroyer.  The merchant missile ships would have 450-600 missiles versus 90 on one destroyer. Offensive and defensive missiles are one of the main metrics for how much combat capability there is in a fleet.
The line item cost for Mk41 VLS is around $51-54 million per ship set (twelve modules).  For hardware alone, the cost drops to $33-36 million per ship set.  This means the cost of the missiles is about 2-4% of the cost of a $1.5 billion US destroyer.  https://www.nextbigfuture.com/2019/01/us-shift-to-missile-container-navy-would-be-six-times-more-cost-effective.html
Posted by Bob Dinn at 7:03 PM