"We are walking back, there's a building about to blow up." 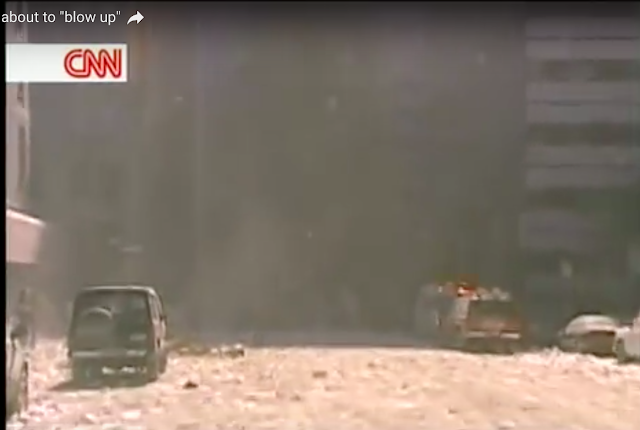 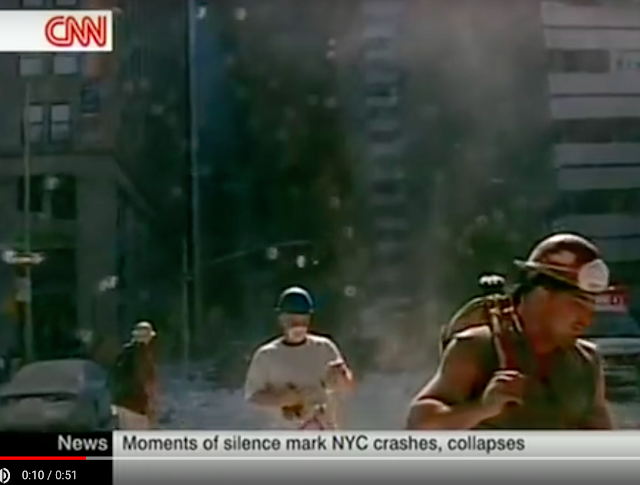 at 9 seconds into this 2006 published video:
"Did you hear that?"
"Keep your eye on that building, it's coming down"
"Move it back here.  Alright guys?..Sorry"
"The building is about to blow up, move it back"
"We are walking back, there's a building about to blow up.  There's flame and debris coming down.”
https://www.youtube.com/watch?v=cU_43SwWD9A
……………………………………………………………………..................................................…
5-30-2017    The deal was unusual in a variety of ways.  Although the Port Authority carried only $1.5 billion of insurance coverage on the WTC complex, which earlier that year had been valued at $1.2 billion, Silverstein had insisted on doubling that amount, insuring the buildings for $3.55 billion.  Silverstein’s insurance broker struggled to put that much coverage in place and ultimately had to split it among 25 dealers. The negotiations were so involved that only temporary contracts were in place for the insurance at the time the lease was signed and by September the contracts were still being finalized.
Silverstein’s group was also explicitly given the right to rebuild the structures if they were destroyed, and even to expand the amount of retail space on the site if rebuilding did take place.
Within hours of the destruction of the Twin Towers on September 11th, Silverstein was on the phone to his lawyers, trying to determine if his insurance policies could “construe the attacks as two separate, insurable incidents rather than one.”  Silverstein spent years in the courts attempting to win $7.1 billion from his $3.55 billion insurance policy and in 2007 walked away with $4.55 billion, the largest single insurance settlement ever.  As soon as the deal was announced Silverstein sued United and American Airlines for a further $3.5 billion for their “negligence” in the 9/11 attacks, a claim that was struck down by the courts but is still on appeal.
Perhaps even more outrageously, in a secret deal in 2003, the Port Authority agreed to pay back 80% of their initial equity in the lease, but allowed the Silverstein group to maintain control of the site.  The deal gave Silverstein, Goldman and Cayre $98 million of the $125 million they put down on the lease, and a further $130 million in insurance proceeds that were earmarked for the site’s rebuilding.


In the end, Silverstein profited from the 9/11 attacks to the tune of $4.55 billion and counting.   https://www.quora.com/How-much-money-did-the-owner-s-of-the-World-Trade-Center-in-New-York-receive-from-the-insurance-company-after-the-attacks-of-9-11
Posted by Bob Dinn at 4:02 PM