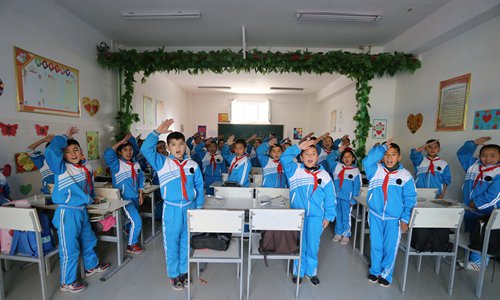 10-21-2018    (Chinese position on Xinjiang "educational"/detainment centers summed up by "reformed" Uighurs, as presented in the Chinese government-controlled news report following:)
Trainees can receive free vocational training to improve their command over the country’s common language, national laws and regulations and vocational skills, among others.  “I was born in a religious family and was told that I was born to be a Muslim.  I had little knowledge of laws before participating in the program.  Distorted doctrines spread by religious extremists are against our laws,” Eli Matusun told the Global Times.  “The program was good timing for me, since we learned that extremism is the root of terrorism and violence and if we go further astray, we would become terrorists,” he said.  Eli Matusu said that he hopes to learn more through the program and plans to start his own business in the future....


An outspoken former detainee in China’s internment camps for Muslims has said that his application for a visa to visit the United States was rejected even though he had been invited to speak at Congress about his ordeal.
Kazakh national Omir Bekali was asked to travel to Washington in September by the chairs of the Congressional-Executive Committee on China.  He said his application was rejected by the US consulate in Istanbul on 2 October after he was questioned about his employment status.  ...

Bekali is named in the proposed legislation among those who have testified to the indoctrination, humiliation, and indefinite detention of internees.
"In China, the government is engaged in the persecution of religious and ethnic minorities that is straight out of George Orwell," outgoing US Ambassador to the United Nations Nikki Haley said in a speech on Monday.  "It is the largest internment of civilians in the world today.
"https://www.theguardian.com/world/2018/oct/18/omir-bekali-china-camp-detainee-us-visa-denied-despite-congress-invitation
Posted by Bob Dinn at 1:43 PM