on tasers and the militarized corporate state

• Of course tasers should be banned.  A no-brainer.  Tasers cause more harm than good and are disproportionately used on black people and people with mental illness and other health conditions such as deafness.

Last year, British police used a taser on its own race relations adviser in Bristol as he was going into his home:  https://www. Theguardian. Com/world/2017/jan/20/police-taser-race-relations-adviser-bristol-judah-adunbi

An ex-soccer player died after having been tasered in Britain.  Of course, He too was black.  Https://www. Dailymail. Co. Uk/wires/ap/article-3741443/Football-club-Ex-player-dead-shot-Taser. Html

Tasers are also often used on patients in psychiatric hospitals where police have no business unless you are willing to have police carry out procedures like appendectomies and tumor removal surgery too.

A $900, 000 settlement was paid earlier this year to an 86-year-old man who was tasered: https://www. Nashvilletnlaw. Com/blog/86-year-old-man-receives-900000-settlement-taser-case/
PS
Handguns should also be banned in the US, Both for police and the public.  The more guns are owned by members of the public, The more police officers die and the more afraid police officers become and the more likely they are to kill first and ask questions later.  The graphs showing the differences are like comparing Mount Everest with a sandgrain. Posted by: AngelinaSouren

• I mean, Duh.  Police can hurt people with these.  If they are just being arrested,  And are not putting up a fight, Or are just running away, There's no need to harm innocent people.  Tasers are excessive, And I think that they can still be sold to the public, As a means of self-defence, But not for the police. Posted by: Gr3mlin

• If not banned then restricted.  Individual Police Offices have already shown many times that they do not posses the self control to know when not to use these weapons on people they could otherwise control by securing their limbs.

Tazering 84 year old seniors and children as young as 13.  People who are mentally challenged and overall people who do not pose a threat to them.  These are the acts of sadist - no other honest way to look at it.  We need national guidelines so that police in small podunk town will not have excuses.
And needless to say, if the rules prohibit tazering, then should also cover shootings.

• I have been shot with a taser On my 27th birthday I had the cops called on me for disorderly conduct and when the officer arrived I was sitting down and he informed me I was under-arrest and to get on my feet so I stood up and said this is bullshit and walked toward him so he could handcuff me.  He never told me to get on the ground or put my hands up or behind my back and It should be pointed out that this was the 3rd time out of 4 times that this same cop arrested me and I always felt he was out to get me.  So when I stood up he pushed me through a window probably to give him time to grab his taser from its holster and when I turned around he shot me in the stomach and gave me at least 2 jolts.  I dropped immediately and the paramedics arrived 10 minutes later to pullout the taser from my stomach.  This cop in my view used excessive force and just pushing me threw the window would have given him time to restrain me because it was 15 seconds before I ever turned around, but he just had to use that Damn taser and ultimately got his wish.  Cops these days have no remorse for the pain and suffering they cause when they decide to go beyond the normal apprehension of a suspect and are trained from day one to use excessive force if the suspect doesn't bow down to them. I feel a taser is just another toy for them to play with and they will use it whenever they get a chance just like an assault rifle.  If a cop isn't man enough to take down a suspect without a taser than they shouldn't be a cop.

• Ban tasers for ever Seriously people.  These are modern mobile torture devices and the police know it.  People have died from them all over the world.  Only sadist's use tasers.  The reason why it's better for police to only use guns is so that they don't go to far.  To use a firearm means it's a life and death situation.  The amount of paperwork the officer has to do if he fires off 1 bullet is massive.  How many times have we seen dim witted sadistic police officers tase people over minor offences??? It's beyond absurd now. Posted by: lockscombi

• Have the people who defend tasers ever actually been shot by one!!!! I have been taserd by the trigger happy sadistic uk police.
I was taserd 3 times and once in the head, YES THE HEAD.
Then whilst unconscious and convulsing on my kitchen floor they then smashed my face in with batons torches and the good old policeman's boot!!.
I was hospitalised and needed my face sewn back together.
Oh and I sued these animals in uniform and won!!
Tasers are POTENTIAL KILLERS FACT!!!!!!!!!!!!!!!!!!!!!!!!!!!!!!!
And before all the bleeding heart brigade start shouting 2 yeh you must have done something real bad for the cops to nearly kill you"
no I was no bank robber, no terrorist, no psychotic mad man brandishing a gun or knife!!
I was in my own home in my shorts when they tried to kill me.
My crime was calling an Asian taxi driver a pakki!!!
https://www.debate.org/opinions/should-the-use-of-tasers-by-police-be-banned
…………………………………………………………
10-4-15 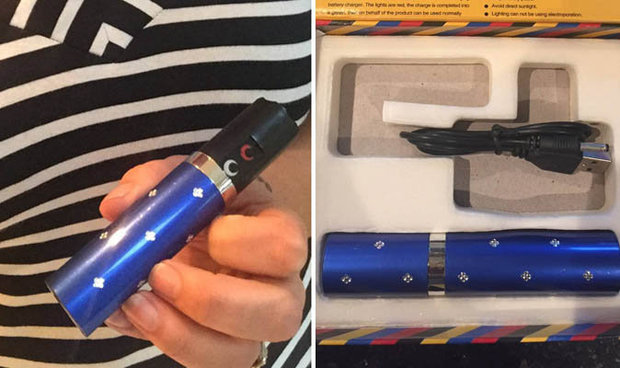 They are taking the law into their own hands to deter rapists, muggers and burglars.

The weapons, which deliver a shock 60 times more powerful than those used by police, are illegal in the UK.
Carrying one could result in a five-year jail stretch for firearms possession….
A weapons dealer in Manchester told the Daily Star Sunday: “These are very easy to get hold of. You would be surprised how many girls and women who normally have nothing to do with crime are buying them.  “You’ve also got girls involved in gangs who carry them…and they will use them.”
He said dealers buy them from China and the US, adding: “The Chinese ship them over all the time. They don’t care if they’re banned in your country or not.  They just want the cash.”   https://www.dailystar.co.uk/news/latest-news/468132/Stun-guns-disguised-lipstick-3-million-volts
………………………………………………………..…...................................…
2-11-2019       We’ve seen the police transformed from community peacekeepers to point guards for the militarized corporate state. From Boston to Ferguson and every point in between, police have pushed around, prodded, poked, probed, scanned, shot and intimidated the very individuals—we the taxpayers—whose rights they were hired to safeguard….
We’ve been treated like guinea pigs, targeted by the government and social media for psychological experiments on how to manipulate the masses.  We’ve been tasered for talking back to police, tackled for taking pictures of police abuses, and threatened with jail time for invoking our rights.