Dr. Happer on how CO2 works in Earth's atmosphere

Feb. 2016  Dr. Happer is a physicist who has specialized in the interactions of radiation with matter, a key issue in greenhouse warming and optics.  Happer, Princeton physics professor emeritus, invented the sodium laser guide star used by astronomers and the military to reduce atmospheric distortion of light and was a co-author of an early book on global warming, The Long-Term Impacts of Increasing Atmospheric Carbon Dioxide Levels (MacDonald 1981). https://wattsupwiththat.com/2018/09/01/the-great-climate-change-debate-william-happer-v-david-karoly-part-a/
………………………………..............................................
Dr. Happer stated in the Feb. 2016 debate:
“The troposphere — the first 11 km of air — is quite different from the stratosphere.  Close to the earth's surface, much of the heat transfer is by convection of moist air and not by radiation, where more CO2 could make a direct difference.  More CO2 will probably warm the troposphere and the earth's surface. But the magnitude of the warming is very poorly known. My educated guess is that doubling CO2 concentrations will warm the surface by about 1° C and will warm the middle troposphere by about 1.2° C.  These are numbers that you calculate from the direct effects of more CO2.  The much higher “equilibrium climate sensitivities” quoted by the IPCC, say 3° C for doubling CO2, come from assuming that the relatively small direct temperature increase from more CO2 is greatly amplified by the changes in the properties of water vapor and clouds.  There is less observational support with each passing year for this “positive feedback” on the direct warming from CO2….
“Above the tropopause, in the stratosphere, the air no longer cools with increasing altitude.  Starting at about 20 km, it begins to warm substantially, and the temperature peaks at about 0° C around 50 km altitude, where the absorption of ultraviolet solar radiation by ozone (O3) causes the maximum temperature rise. The heat from the absorbed ultraviolet light is dumped to space and to the earth below as infrared radiation emitted by greenhouse molecules, mainly CO2, but with some contribution from O3.  More CO2 will cool the stratosphere, since more infrared-active molecules are available to radiate away energy….
“Some small fraction of the 1° C warming during the past two centuries must have been due to increasing CO2, which is indeed a greenhouse gas.  In equilibrium, the temperature increase should have been ΔT=S log2 (400 ppm/280 ppm), where S is the equilibrium climate sensitivity.  Without feedback, the theoretical sensitivity can be calculated to be very nearly S = 1° C, and the base-two logarithm is log2 (400/280) = 0.51.  So, the feedback-free warming should have been ΔT = 0.51° C, or about half of the observed warming.  The other half of the warming would have been due to natural causes, perhaps related to the recovery of the earth from the ‘Little Ice Age,’ which we will discuss a bit more below.”     https://thebestschools.org/special/karoly-happer-dialogue-global-warming/william-happer-interview/ 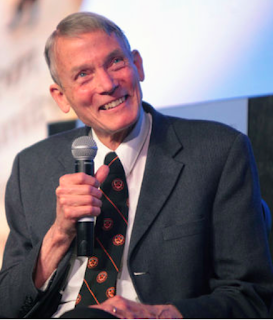 Dr. Happer in 2016
https://www.sciencemag.org/news/2018/09/trump-adds-physicist-will-happer-climate-science-opponent-white-house-staff
Posted by Bob Dinn at 3:18 PM