a Uighur spying for China against Uighurs Amat is Uighur….”My role," Amat explains,"was to feed information to officials.  I reported on everything people did - what they ate, drank, what they did in private in their homes, whether it was friends or relatives, I shared it all.”  Amat says his information was sent to authorities.  What upsets Amat, he says, is that the officials often imprisoned people for "harmless and inconsequential" reasons.

"You could have a long beard or some religious text on your phone, or maybe you studied abroad or had a long-distance phone call with someone overseas.  It could all land you in detention.”…
Amat says his handler sent him to also spy abroad as part of China's expanding global network of surveillance.  From 2012 to 2018 Amat says he was told to infiltrate Uighur communities in Afghanistan, Pakistan and Turkey.  He says Beijing has "countless" informants around the world.
"I’m from the small town of Karamay and I'm just one of many my handler deals with.  There are dozens of towns the same size throughout Xinjiang, not to mention big cities.  And then there are the international operations.  So you can imagine how many eyes are out there.”…Amat says the government is "outright lying" and he himself spent a year and a half in a detention centre, having been arrested for trying to fly to the Middle East and join Muslim fighters.
It was while he was serving his sentence that he says authorities recruited him.   Once he agreed to be an informant, Amat says he was given the job of cleaning the detention facilities.  His rounds gave him access to many areas of the centre.
"I've seen many people being beaten in interrogations inside.   At times they used bare electrical cords--which inflict pain beyond what you can imagine.  Those who were beaten made horrible shrieks, especially the young ladies my age.  What I can't forget is the blood--human blood on the floor, on the walls, everywhere, afterwards."
Al Jazeera spoke to more than a dozen former detainees.  Many confirm they either witnessed or were themselves tortured and abused in these centres. 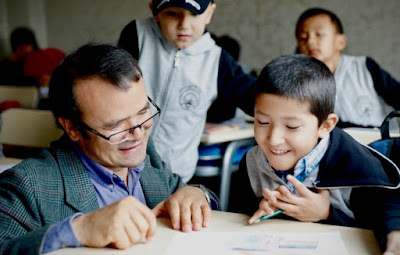 -Uighur Muslim scholar Abduweli Ayup volunteers his time to teach the Uighur language and culture to children who have fled Xinjiang with their families [Steve Chao/Al Jazeera]
Abduweli Ayup, a teacher and writer, spent 15 months in three facilities in Urumqi, the capital of Xinjiang province.  On the day of his arrest he says police officers allegedly took him to a holding cell and raped him.  "The first day was very bad," says Ayup.   "They stripped me of my clothes, slapped my buttocks and then they abused me ... more than 20 Chinese guys.  The next day police asked me, 'One day if you guys are in power, what will you do to us? ' I said, 'Look, I'm a human being,  I'm not an animal like you'."
Ayup says in the months that followed, he was regularly beaten by other inmates.  Prison guards ignored his calls for help, he adds.  "They want you to be tortured like this.  If you're tortured a lot, it’s easier for you to cooperate with them during the interrogation.”  Ayup says the rape and beatings were orchestrated to get him to admit to being a separatist or a "terrorist".
"I am a teacher, I am a scholar.  I have never thought about these things; I am not a separatist, I am not a terrorist.  What do I have to confess?" he asks.


Ayup was jailed for raising money for Uighur schools after Chinese authorities made it illegal for children to learn the Uighur language.   "They want to delete Uighur.  They want Uighurs to believe the Chinese Communist Party is God," Ayup says.  https://www.aljazeera.com/blogs/asia/2019/01/exposed-china-surveillance-muslim-uighurs-190130011449217.html
Posted by Bob Dinn at 1:58 PM