Putin and the hangmen honor the Cheka 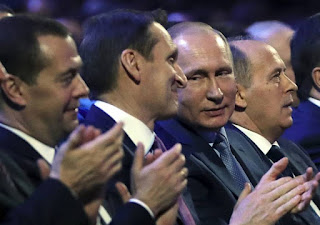 12-28-2017    On Dec. 20 the Russian government proudly celebrated the 100th anniversary of the founding of the Cheka, the Soviet secret police.  In his official message of congratulations to “officers and veterans” of the security services, President Vladimir Putin urged them to “honor the traditions and the legacy of their predecessors.”
Given the political repression in today’s Russia, it seems they already do.  In an interview with the main government newspaper, Alexander Bortnikov, the director of the Federal Security Service, praised Stalin’s NKVD chief Lavrenti Beria.  He noted KGB Chairman Yuri Andropov’s “flexible methods of defending the state order” in the 1970s (presumably referring to the practice of committing dissidents to mental asylums championed by him).  He asserted that the early actions of the Cheka were directed against “the subversive activities of a wide counterrevolutionary-terrorist underground linked with émigré circles and foreign secret services” and affirmed that there was an “objective side” to the prosecutions and show trials during the Great Terror of the 1930s.  The fulsomeness of this praise came as a shock even to some loyalists of the Putin regime....
As President Boris Yeltsin later acknowledged, “the KGB … turned out to be unreformable.”   On Dec. 20, 1999, Yeltsin’s prime minister, a relative political unknown by the name of Vladimir Putin — a former officer in the KGB — came to the Lubyanka to unveil a restored memorial plaque to Andropov that had been dismantled in August 1991.   It was a telling sign of things to come.  https://www.washingtonpost.com/news/democracy-post/wp/2017/12/28/putins-dark-cult-of-the-secret-police/?utm_term=.9028c0cc3630
12-21-17     In a Kremlin speech marking the 100th anniversary of the creation of the Bolshevik secret police, the Cheka, Putin emphasized that it and Soviet-era successor agencies such as the KGB were an “inalienable part of our history.”  Putin served with the KGB for 16 years and briefly headed the main state security agency that followed it, the Federal Security Service, or FSB, before his ascent to the presidency.  He said in his speech that “no matter how the times were changing, the majority of people who chose that difficult profession were true patriots and defenders of the state.”   https://www.japantimes.co.jp/news/2017/12/21/world/politics-diplomacy-world/centennial-infamous-bolshevik-secret-police-putin-praises-russian-spies-foiling-60-terror-attacks/#.WlwOgYc-BAY
......................................................................
On December 20, 1917, on the initiative of Felix Dzerzhinsky, the Cheka was created (All-Russian Extraordinary Commission for Combating Counter-Revolution and Sabotage at the Council of People's Commissars of the RSFSR). The modern organs of state security are the successors of the Chekists.  https://dninews.com/article/monument-honour-100th-anniversary-state-security-authorities-opened-donetsk
Posted by Bob Dinn at 6:19 PM