As the public in Central Asia become more vocal 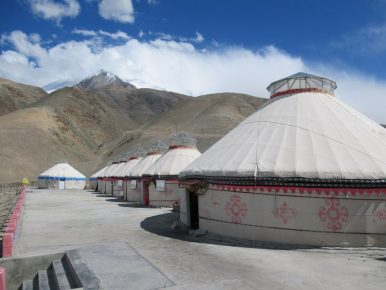 -Kyrgyz yurts in Xinjiang   Flickr / davidstanleytravel
Children of ethnic Kazakhs held at re-education camps in China’s Xinjiang pleaded for their families’ release.   “I ask the whole world, please, help us get our mom back,” one little girl says between sobs in a video posted by RFE/RL , “We miss her very much.”

The heartbreaking footage underscores the role the people of Central Asia have had in putting a human face on the incarceration of an estimated million Muslims in Xinjiang by Chinese authorities.  While the great majority of those detained in what Beijing calls free “vocational education and training centers” are Uyghurs, ethnic Kazakhs and ethnic Kyrgyz — both Muslim and each with their own prefecture within Xinjiang — have also been detained in the camps.
Recently a group of activists in Bishkek formed the Committee To Protect Kyrgyz People In China.  The group, as RFE/RL reports, is mostly ethnic Kyrgyz who moved to Kyrgyzstan from China and obtained residence or citizenship.  Like the children gathered by Atazhurt in Almaty, the members of the Committee To Protect Kyrgyz People In China say they have relatives in Xinjiang who had disappeared or who visited the region after moving to Kyrgyzstan and have not returned.  As the public in Central Asia — primarily Kazakhstan and Kyrgyzstan — become more vocal about their personal connection to the misery playing out in Xinjiang, their governments find little room  to maneuver and less political will to make a scene.  Even Astana, far more powerful on the global stage than Bishkek, is meek in the face of Beijing. Kazakhstan has managed to free some Kazakh citizens detained but unable to budge China on the larger internment issue.  Kyrgyzstan could find small success in a similar fashion.  The Uyghurs have no other state that claims them and thus no other state to advocate for them.   https://thediplomat.com/2018/12/central-asians-organize-to-draw-attention-to-xinjiang-camps/
Posted by Bob Dinn at 5:02 PM