2-16-2015    In the summer of 2013, I interviewed Nisman by phone and email.  I agreed to meet him in Washington, D.C., where a congressional committee had invited him to testify about Iran's spy network in Latin America and its alleged role in a plot to bomb John F. Kennedy Airport in New York. At the last minute, though, the Argentine government blocked his trip. President Cristina Fernández de Kirchner had agreed months earlier with Iranian leaders to set up a joint "truth commission" about the case, part of a geopolitical shift toward Iran and Venezuela.
Nisman and many others feared his own government intended to scuttle his prosecution.  In an email to me on July 10, 2013, he wrote: "I followed the [Congressional] hearing on the web and I was very sorry I couldn't be there."
His troubles got worse.  Last December, the government fired a powerful spy chief who was Nisman's lead investigator.  The prosecutor retaliated with a bombshell:  he accused the president, her foreign minister and other political figures of conspiring to absolve the accused Iranians in exchange for commercial deals.  Iranian diplomat Mohsen Rabbani, a top suspect in the 1994 attack, participated in secret talks, according to Nisman's criminal complaint.
Argentine spies "negotiated with Mohsen Rabbani," an indignant Nisman said in a television interview on Jan. 14.  "Not just with the state that protects the terrorists, but also with the terrorists." 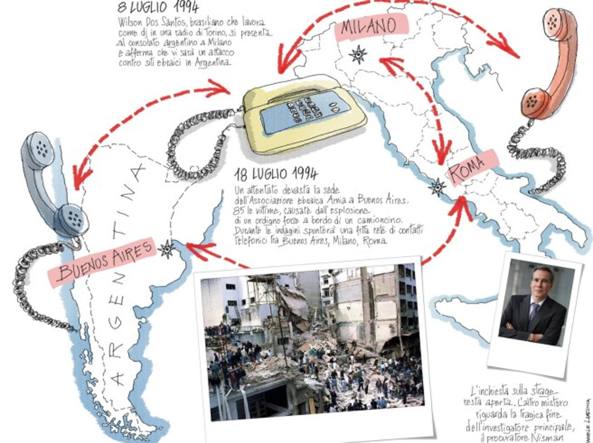 shadow
A nice neighborhood in Buenos Aires. Shops, a restaurant where they roast meat.  Not far away a small access, without signs, on a lowered shutter. We enter a garage with some cars. We pass them to head for another door, on the bottom. Who accompanies me is the guide and here the surprise: a corridor, rooms, desks, people at work between papers and files. It is the office of a security service that dealt with Middle Eastern terrorism in Argentina, a country twice hit by anti-Israeli attacks.  And I came here to investigate those attacks, I made several trips pushing me also to neighboring Paraguay. It was the second half of the '90s. Far in time, far from Milan, but only in appearance. Because our city was close, held together with those pages of terror by telephone contacts and strange characters.
We have to go back, on July 8, 1994.  A Brazilian, Wilson Roberto Dos Santos, globetrotter from the smoky past, able to be a pilot or engineer, has important information to communicate:  there will soon be an action against a Jewish goal in Argentina, to organize a pro-Iranian cell based in the Paraguayan town of Ciudad del Este.  A piece of news that he considers good.  And decides to pass it to three consulates in Milan, the representatives of Brazil, Argentina and Israel.  The officials listen to him, they turn the note, but further it does not go though there is a new report from Sao Paulo.  They spend a few days and everything changes because there really is a massacre, just in Buenos Aires, as predicted by Dos Santos.  It also matches the goal.
A bomb - apparently hidden inside a van - crumbles the headquarters of the Jewish Amia, 85 victims . The agents hypothesize that to activate the charge was a kamikaze, on the originators many theories . Iran is immediately called into question, there is a suspicion that elements led by Hezbollah and Khomeinist agents have repeated the operation that had devastated the Israeli embassy in 1992.  Episodes of the secret war between the two enemies.  But around - between misdirections, lies, maneuvers of all kinds - proliferate scenarios involving Syria, neo-Nazi military, corrupt police, a mixture of all this.
A theater where the Brazilian appears to have been built to confuse investigators.  Dos Santos has made occasional jobs, he has met an Iranian, Nasrim Mukhtari, a woman of the most diverse occupations, not always noble.  They frequented the same bar in Buenos Aires, the Casablanca, the starting point of the story.  Wilson reappears on the other side of the Atlantic moving between Europe and the Middle East.  He is a DJ in a radio station in Turin, he travels around Italy with the daughter of a rich Brazilian, he finds Nasrim, together they spend time with Italians who will quickly forget that friendship.  When we look for them, a long time later, they will reply with "I do not remember".
I get so many suggestions from the interview with a source in São Paulo , Brazil , but they are contour data.  In Ciudad del Este I "see" how the Lebanese Hezbollah and Sunni elements have created a hub for making money.  There are mosques, mullahs, a strong Middle Eastern community and then a crown of merchant-packed shopping malls.  Low cost, often fake.  I still remember the perfect copies of a branded phone. Another world where spies and smugglers meet, fixers and "creatures" like Dos Santos, who know everything and nothing.
The Brazilian puts his.  In November 1994, portrayed claiming he had guessed, there was no tip on the attack.  Possible?  Wilson is an informer of Brazilians employed to trigger the alarm and was released when it was no longer needed?  Nothing strange, very often the 007 do so.  He disappears, then returns to everyone's eyes as they send him on trial.  It ends with a six-year sentence for perjury, a sentence later reduced to three.  Her friend, Nasrim, will be caught with a service operation in Switzerland and taken to Buenos Aires, but will not have to answer for anything.  They will report in the dark while the investigation will be held back by poisons, untrustworthy witnesses, torpedo magistrates.
The investigators will find traces of phone calls between the Argentine capital and some Italian locations : a fax installed in the then Milan Fair, a number of a village in the Comasco, a diplomatic office in Rome . Fragments in a sea of ​​debris, secondary paths without landings in a story impossible to close.  On 18 January 2015, Alberto Nisman, the prosecutor convinced of the responsibility of Iran and a great accuser of the former president Cristina Kirchner, was found without life suspected of having wanted to cover the Iranian regime to safeguard the business.  Nisman committed suicide, it's the first version.  Two years later there will be talk of murder, but without reaching a final and accepted verdict. Who knows if one day the victims of the Amia will have justice. 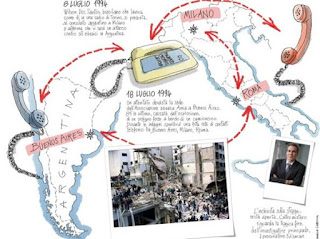