If men would reckon honestly they would see that the outer self is in a constant state of vacillation and then they would be more inclined to tie themselves to wings of faith.  For angelic wings are actually pinions of light which are able to cut men loose and set them free for all eternity from those vibratory actions of the human senses which constantly make of their consciousness a literal yo-yo—now up and now down.  It is constancy that we would give to you as our gift of faith, for constancy is the power to overcome those oppressive human traits that have never given man his freedom….
Ours is the task—and not an easy one at that—of awakening a distraught humanity whose hopes for peace and reality have again and again been dashed to pieces by human nonsense.  For what is it that you can call it but human nonsense when individuals constantly create a jangle of sounds and scenarios that tense the nerves and create a sinking feeling in the belly of their captive audiences?  These are the vibrations that lead to hopelessness in the lives of many who do not see beyond their own noses or their experiences of a moment….
Realize that the Law of the Infinite One is ever accurate in all of its judgments and manifestations.  Be unconcerned with mortal considerations except to see to it that you yourselves are not guilty of the karma of placing oppressive obstacles in the pathway of your brother….
Will you therefore call with me to the powers of heaven and to the unfailing light of God for dispensations from the Solar Lords for the staying of the hand of the destructive forces that use the psychology of darkness against unsuspecting souls?  Will you ask that these forces be exposed and that the work of the powers of darkness who would divide men’s hearts be brought to naught?…
You can call to me and to my sword of blue flame which is a tangible manifestation of the sacred fire from God’s heart to comfort you and to cut you free from all negation--even from those whom you may love dearly but who do not reciprocate your love….there is only one reason for man’s life upon earth and that is in order that he might find an unyielding, uncompromising faith in the unfolding destiny of his life under the hand of infinite Grace….one’s loyalty must be to God and to Him alone.  This loyalty should be guarded with one’s life and it must never be compromised through associations with those who by their actions have proven that they are loyal neither to Him nor to their “friends” but only to themselves.  Let men be a friend to the God who lives in all, and then their loyalties to God and man will be strengthened and preserved….
When the soul wrestles with the human ego let go of your sense of struggle and let the virtue of the light prevail….To you it is given to know the mysteries of God.     -Archangel Michael:  Pearls of Wisdom 12:47 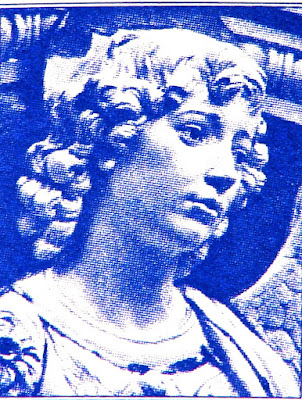 …………………………………………........................................…
I AM the golden victorious light, the full-orbed flame illumination from the heart ofGod that refuses to accept any concept of limitation concerning my eternal reason for being here and now made manifest in the chalice of the present hour.
I AM the radiation of that victory which sweeps across the face of the Earth, removing barriers by the power of faith that will not be denied its immortal birthright.
I AM the flame of illumination that sweeps all continents, awakening peoples of every walk of life from the lethargy and sleep of the ages to a vital breathing awareness of the wisdom that transcends dogma, sense consciousness and personality functions, threading the eye of the needle with the thread of light-determination whose sowings upon the garments of the Lord of Creation produce elevation, consummation, radiation, purification and freedom for every man, woman and child upon this planet.
O world , awake,
Your dusty selves now shake;
Purify and rectify,
New ways of thought to make!  (3x or 9x)

And in full faith I consciously accept this manifest, manifest, manifest right here and now with full power, eternally sustained, all-powerfully active, ever expanding and world enfolding until all are wholly ascended in the light and free.  Beloved I AM, beloved I AM, beloved I AM!
-by Mighty Victory
..............................................................................................................................
...fear is the anxiety and the uncertainty that emerges from deep within the recesses of the human consciousness the moment that it separates itself from God.  Out of this fear there comes forth every dark form, every mania, every evil influence to which the race is heir.
Truly it can be said that there are islands of dense substance, or psychic pollution, located within the consciousness of mankind.  Under certain conditions, always accompanied by an outburst of emotional energy, these islands--again, conglomerate globs of fear and the compounds of fear--rapidly unite with the mainland of negation in the mass consciousness of the world, at the same time amplifying the momentums of negation within the world of the individual.  This results in a great inrush of tides of unhappiness caused by an intensification of those qualities and conditions which are quite the reverse of the heavenly plan....
First of all fear is vibration--negative vibration--a sense of misapprehension of life and its purposes. But it is more than that--it is wrong custom.  Many of mankind's recurring experiences have been undesirable, therefore in the awareness that so-called evil can befall them men are apprehensive about their future.  They question whether they will attain success and whether they will be able to retain success once it is meted out to them  The memory of past failures then keeps alive in the present the records of fear.
Understanding the Father's true plan is ever beneficial in eradicating fear from an individual's world....God has employed every spiritual example to inspire man with the great possibilities that are in reality within himself.  To remove fear then is to remove the deep-seated resistance to the flow of light and light's possibilities in the being of man.  To remove fear is an act of God, for God did not implant fear in man.  Fear was accepted by man through his ignorance of the Law and his unbelief--through a lack of the knowledge of the Law and of how to manipulate the many facets of the Law....
Becoming of one accord with the Father, the I AM Presence, is the first step in eradicating fear.          -Maitreya:  "The Overcoming of Fear Through Decrees",  1965 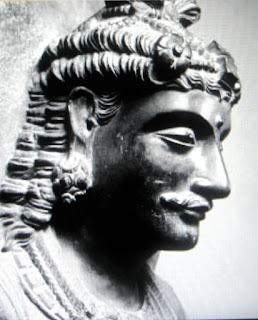 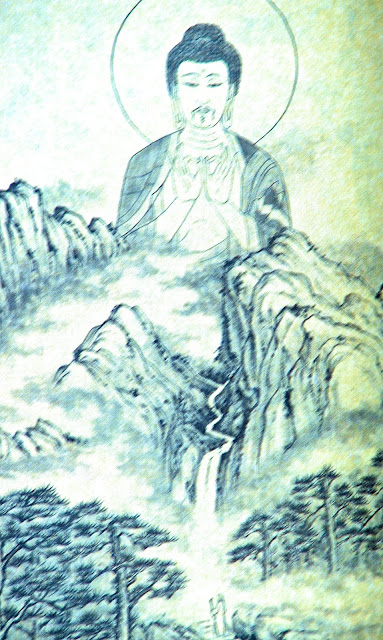 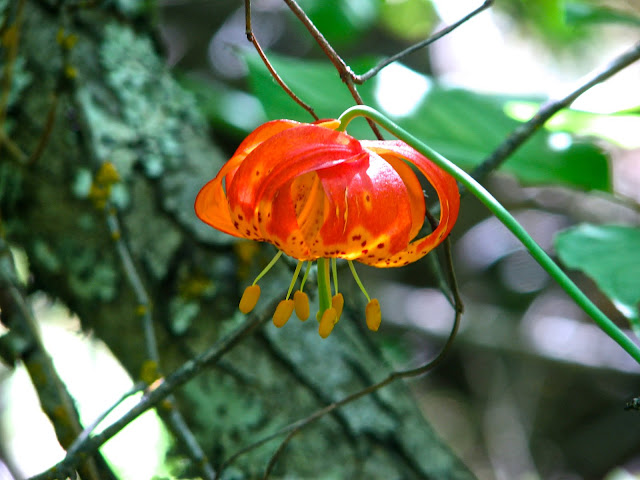 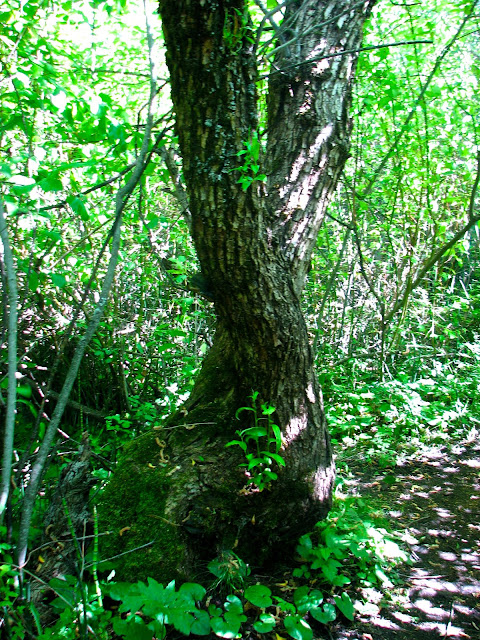 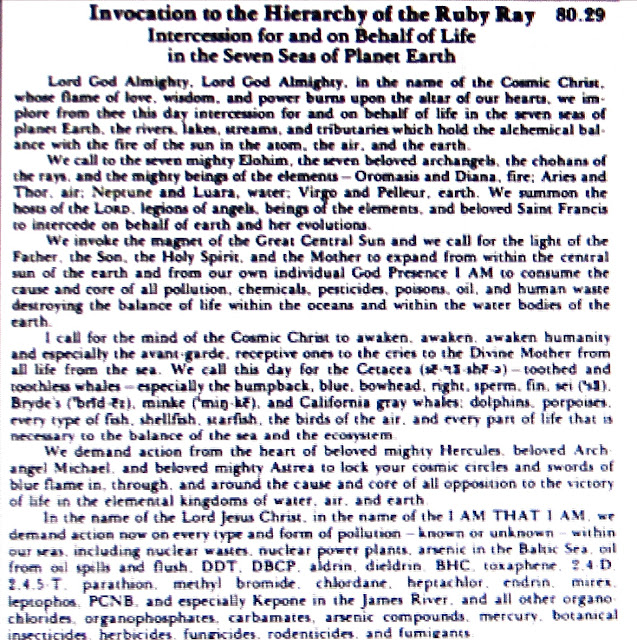 Beloved Saint Germain,  we call for the full gathered momentum of your violet flame to transmute the cause and core of all imbalance present within the water and water systems of Earth.  Let the mighty action of the Holy Spirit purge by the sacred fire of El Shaddai the cause and core of all opposition to the balance of life within the sea.  We call to the salamanders, sylphs, gnomes and undines serving with the Faithful and True to go forth and cut animal and elemental life free from the fallen ones, the Watchers and their godless creation.
We call for the judgment from the hand of Almighty God upon all individuals, especially Russian, Japanese and Norwegian, knowingly aborting the life of God in manifestation--human, animal, angelic and divine.  We call for the threefold flame of life to expand within receptive hearts the comfort flame for all living creatures.  In the name of the entire Spirit of the Great White Brotherhood, I AM THAT I AM, and in the name of Jesus Christ and Mother Mary we call to the heavenly hosts:  we demand the binding and judgment of all individuals this day moving against the light of God that never fails in marine life in utter disregard of the flame of the Holy Spirit present within that life.
We call to Archangel Michael to protect all God-fearing individuals including the Cousteau Society, Animal Welfare Institute and all other constructive societies working for the establishment of the sacredness of life as reverence for life in the hearts of all persons.   Amen.
....................................................... 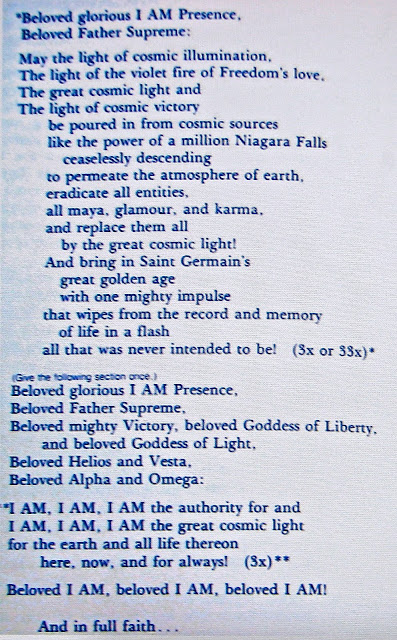