Mark Judge comments on his 1997 memoirs of Georgetown Prep 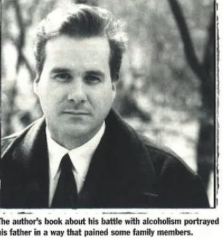 When I was in high school, the headmaster used to say that experience is a tough teacher because it gives the exam before offering the lesson.
I thought I had failed a major life exam this past June when my first book, Wasted:  Tales of a GenX Drunk, was published.  Wasted is a memoir recounting the story of my alcoholism and recovery.  Set in my native Washington, the book involves family, friends, and the schools I went to.  To protect people’s privacy, I changed virtually all the names.
All, that is, except for my family.  Despite my alcoholism, I had a pretty normal childhood, complete with run-ins with my parents, particularly my father.  Because such conflict is part of growing up, and because my home life was like Beaver Cleaver’s compared to horror stories I’ve heard in recovery, I didn’t think talking about it would cause any trouble.
Wrong.  The book had been out for only a few hours when I got a call from my mother.  “I’ve seen your book, and I am very upset.” she said.
In particular, my mother was unhappy with the portrayal of my father, who had died a year before the book was published.  He’d been a brilliant, gentle man and a respected journalist, but he also was a daily hard drinker who could be moody after a couple of cocktails.   In revealing this in Wasted, I went to great lengths—or so I thought—to make clear that my dad was not a violent man and that my generation gap with him was pretty much par for the course.  Indeed, I pointed out that compared to some other kids, I considered myself lucky.
Apparently I didn’t do a very good job. A couple of hours after I heard from my mother, my older brother called.  “I just have one question,” he said, drawing each word out in disbelief. “What were you thinking?”

With my family angry, I began to second-guess myself.  The publisher had asked me to write Wasted in a five-month blitzkrieg in mid-1996.  Maybe my mind had been too tightly focused on alcoholism and its development during my high-school and college years, when my confrontations with my father were at their most acrimonious.  His dark side is certainly evident in Wasted, but perhaps I’d short-changed his love and humor.
I knew I’d done something of the same thing to my old high school, Georgetown Prep. Going to Prep was one of the greatest experiences of my life, yet in my book the school—which I call Loyola Prep—comes off as something of a concentration camp.
But just when I was considering an official retraction, people started coming around. “I guess Dad could be kind of a pain at times,” my sister said to me, sounding relieved that she could admit such a thing to herself.  My other brother said he liked the book, and my mother admitted that once the shock of seeing some family problems in print wore off, she realized that what I had written wasn’t all that bad.  Friends also called to congratulate me, and many had stories of their own to tell about family alcoholism.

Finally, it seemed, the lessons of my book experience were starting to show themselves.  When faced head-on secrets can lose their power to intimidate us.  Scratch through the fear and pain, and you realize that you’re not alone—that nothing in the world has happened just to you.    That’s particularly true of alcoholism, which has some 14 million US victims.
After Wasted had been out for a couple of weeks, I got a call from one of my father’s oldest friends, a woman who had known him from the time they were kids growing up in Chevy Chase.  She liked the book, she said, and didn’t think it was unfair.  She added that I was in good company; Frank McCourt, the author of the best-selling memoir Angela’s Ashes, had so put off family members that they’re still angry with him.
“Every family should have someone who, no matter what, is responsible for telling the truth,” she said.  I felt like I had passed the exam after all.
Writer Mark Judge lives in Potomac.  His book, Wasted:  Tales of a GenX Drunk, was recently (1997) published by Hazelden.  https://www.washingtonian.com/2018/09/17/mark-judge-michael-judge-brett-kavanaugh-memoir/


………………………………………………
9-25-18    I would like to focus on the statement by the judge’s former roommate at Yale, James Roche.  As quoted in the Huffington Post, Roche stated that the two of them would talk in evenings. “It is from this experience,” he said, “that I concluded that although Brett was normally reserved, he was a notably heavy drinker, even by the standards of the time, and that he became aggressive and belligerent when he was very drunk.”  https://www.psychologytoday.com/us/blog/crimes-violence/201809/alcohol-intoxication-violence-and-judge-kavanaugh
Posted by Bob Dinn at 10:04 PM