6-19-19    A nonpartisan tribunal published a report Tuesday accusing China of crimes against humanity, cutting organs out of Falun Gong practitioners alive to transplant into paying clients and potentially preparing an “organ bank” using the millions of mostly Uighur Muslims believed trapped in concentration camps in western China.
The China Tribunal--a panel of international legal experts led by Sir Geoffrey Nice, chief prosecutor in the case against Serbian war criminal Slobodan Milošević – held hearings featuring victims of China’s brutal repression of Falun Gong practitioners and ethnic Uighurs as well as eyewitnesses who testified to seeing and participating in organ testing and harvesting.  The tribunal repeatedly highlighted in its report that it attempted to contact the Chinese government and bring in witnesses favorable to the Chinese Communist Party (CCP), but China failed to cooperate.  It concluded that China is currently harvesting organs from Falun Gong practitioners and has begun extensive testing of its captive Uighur camp population that does not have any other overt utility outside of organ harvesting….As recently as 2017, Chinese state media applauded itself for its “fair” organ donation system that it claimed was “hailed” by the international community….
In December 2018 the author of The Slaughter, Ethan Gutman, told the Tribunal “Over the last 18 months literally every Uyghur man, woman, and child – about 15 million people--have been blood and DNA tested, and that blood testing is compatible with tissue matching.”
Similar testing is occurring in the Uighur camps, according to survivors who spoke to the Tribunal.  The report concluded that the testing as described, particularly the use of ultrasounds to evaluate the health of various organs in each prisoner, was “highly suggestive of methods used to assess organ function.”  https://www.breitbart.com/asia/2019/06/19/report-suggests-china-preparing-muslims-concentration-camps-organ-harvesting/
…….……………………………………………….
Now artificial intelligence has made civilian surveillance far easier and far more invasive.  AI is rapidly becoming the new best friend of dictators everywhere.  The most sweeping and stifling surveillance program in human history is being employed against the mostly Muslim Uighur minority in northwestern China.  https://www.washingtonpost.com/religion/2019/05/23/chinas-alarming-ai-surveillance-muslims-should-wake-us-up/?noredirect=on&utm_term=.b193100b07d6
………………………………………………………….… 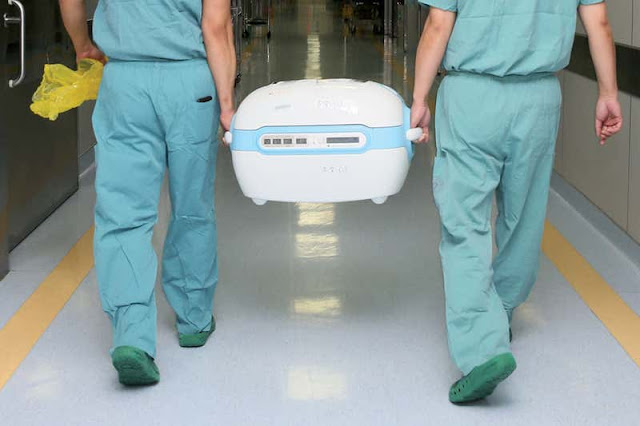 Do figures on Chinese organ donations add up?
Huang Xin/Xinhua/Eyevine


6-18-19    The tribunal was told of an investigation run by another campaign group, the World Organization, to Investigate the Persecution of Falun Gong, in 2018.  The group asked researchers to pretend to be doctors and ring up senior transplant doctors in Chinese hospitals to try to book transplants.  Some were offered waits as short as one or two weeks.  In 9 of the 12 hospitals contacted, doctors verbally confirmed that the organs would be sourced from Falun Gong members.   https://www.newscientist.com/article/2206874-prisoners-in-china-are-still-being-used-as-organ-donors-says-inquiry/
......................................….……………………………………………….....
12-21-2001   in 32 counties in China, UNFPA states, family planning is “fully voluntary” and that there is no coercion....
PRI’s investigative team spent a total of four days in China. During this period, the investigative team interviewed family planning workers and spent over 10 hours interviewing more than two dozen victims or witnesses of coercion in Sihui County. Over four hours of testimonies were recorded on audiotape, and approximately 30 minutes of testimonies were recorded on videotape.
Interviews with victims were also recorded in notebooks, in both Chinese and English, and additional photographic evidence was obtained.  Victims and witnesses of coercion were interviewed privately, not in the presence of officials, to ensure those interviewed were able to speak about their own experiences with the one-child policy without fear of reprisals.
The investigative team also located the Chinese office of family planning in Sihui county, Guangdong Province,and spoke with local family planning officials.  Local officials provided information about UNFPA’s county program, including the location of the office desk of UNFPA’s worker for the Sihui county program.
PRI’s lead investigator returned to the US in early October with the audiotaped and videotaped testimony and all other information obtained by the investigative team during its investigation.
Doing field research in the People’s Republic of China presents challenges. The government is hostile to investigators who do not take the nature of its policies on face value and punishes its domestic critics with extreme severity.  PRI’s investigative team, therefore, took precautions to protect those who testified.  In addition, the names of the translators, the photographer, and China-based personnel of the investigative team have been withheld to prevent retribution by the government of the People’s Republic of China.  Moreover, PRI sought no assistance from the government of the People’s Republic of China to carry out its investigation and received none.
Coercive family planning policies in Sihui include:  age requirements for pregnancy; birth permits; mandatory use of IUDs; mandatory sterilization; crippling fines for non-compliance; imprisonment for non-compliance; destruction of homes and property for non-compliance; forced abortion and forced sterilization.
Witnesses and victims said that population control is implemented by force of the state, rather than, as the UNFPA claims, through “a client-oriented approach”.   ...
Yemlibike Fatkulin to US House Committee on  International Relations, Oct. 2001:  "East Turkistan (which is also called Xinjiang Uyghur Autonomous Region by China), with a Uyghur population around eight million, is regarded as a “minority nationality” and is in theory not subject to the provisions of family planning legislation in China. However in practice the birth control and sterilization policies have been actively promoted and encouraged by the Chinese government in the Uyghur towns and villages of Eastern Turkistan, especially in rural areas.
"Most of my relatives live in Turpan, an oasis town near Urumchi.  My cousin Tursunay, who is Eneytulla’s sister, was sentenced to prison for two years in 1995.  All she did was wearing religious veils and devoted her to study religion.  She was forcibly sterilized in a prison at Turpan.  Now she is out of prison.  However, she could never have a child in her lifetime.
"The Chinese government has set up a large number of family planning work force and birth control clinics in all the hospitals of East Turkistan.  Every year, in order to speed up the implementation of birth control and sterilization policies toward the indigenous Uyghurs, mobile family planning teams are sent out to countryside areas for conducting mass abortion and sterilization.  Those Uyghur women who refuse to conduct abortion are forcibly operated upon."
Chinese birth control policies and regulations imposed on the Uyghurs affect both Uyghur women and children.  My relative Kerimhan’s three babies were all aborted by Chinese doctors in Turpan Yar village 5-star hospital. As a result of forced abortion, she developed severe bleeding problem until this very day.
Besides the complex rules controlling how many children Uyghurs can have legitimately, there is also a series of fines and punishments for Uyghur couples who break the rules and have an unauthorized child."   https://www.pop.org/full-report-on-unfpas-involvement-in-china/
….……………………………………………….
Posted by Bob Dinn at 7:31 PM