4-30-19   The Nicolas Maduro regime has reportedly blocked the Venezuelan people's access to independent news sources amid media coverage of government violence against protesters.
Opposition leader and U.S.-recognized Venezuelan President Juan Guaido announced Tuesday that they had the military backing required to force Maduro from power after a 2018 election that was widely viewed by the international community as illegitimate.
The pro-Maduro and opposition forces clashed throughout the day, with images and video of the video being broadcast both inside and outside of Venezuela. In one widely covered incident, a government military vehicle could be seen plowing through unarmed protesters.
A CNN producer reported the network has been forcibly taken off the air within Venezuela on orders from the Maduro government.  The censorship comes after Maduro detained six Univision journalists in February because he didn't like a question by anchor Jorge Ramos. The journalists were released after three hours and expelled from the country.
A BBC spokesperson confirmed that BBC Global has also been blocked in the country.  Privately owned Radio Caracas Radio also announced it had been shut down by the government but has continued to broadcast on the web platform Periscope. https://freebeacon.com/politics/maduro-regime-censors-cnn-bbc-after-coverage-of-violence-against-protesters/
……
4-30-19  CARACAS (Reuters) - Venezuela President Nicolas Maduro said on Tuesday he had spoken with military leaders and they had shown him “their total loyalty,” after opposition leader Juan Guaido said he had the support of troops to oust Maduro.  https://www.reuters.com/article/us-venezuela-politics-maduro-idUSKCN1S61QW
…………
5-1-19   CARACAS, Venezuela — Dueling demonstrations ramped up Wednesday as thousands of Venezuelans took to the streets of Caracas after opposition leader Juan Guaidó called for the “largest march” in the country's history.
Several thousand protesters supporting the opposition marched in a peaceful demonstration around Altamira square, with the four major avenues around the square surrounded by people.

Demonstrators expressed frustration with the worsening economic conditions and hoped a government led by the opposition could bring change.
Hiter Nieves, 46, said he was marching "for the future of my country.  For my children and for my family," he said.  "We have been oppressed for so many years."
Elizabeth Fernandez, 58, said she wanted to give a new government a chance and more economic opportunities for Venezuela's youth.   https://www.nbcnews.com/news/latino/venezuela-s-opposition-leader-guaid-urges-largest-march-history-n1000641
……….. 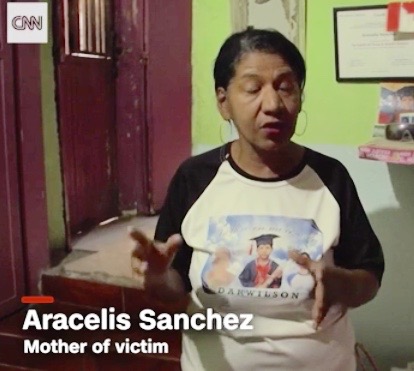 Caracas (CNN)  Sometimes they wear Halloween-style masks.  Sometimes they show their faces.   But when the men dressed in black uniforms come, Venezuelans flee.   On March 18, the men came for Roney Muñoz.
The 27-year-old worked as an engineer in Medellin, Colombia.  But the men caught him in Petare, a poor neighborhood of Caracas, where he was visiting with his wife Yarleidys Dias, 23, and their three children.
They plucked Muñoz's 11-month-old daughter out of his arms, and then dragged him away, leaving the child behind, says Yarleidys.  "It was horrible, they had no compassion for our little girl, nothing.  They just took him as they struck him.  They put him on the van and they hit him, and they hit him, and they hit him," she says, wiping away tears.  The men never identified themselves; they just shoved Muñoz into an unmarked car and drove away.  Yarleidys never saw her husband alive again.