Because of her advocacy work in the West, and previous employment with Washington-based Radio Free Asia, 31 of her cousins have been arrested

4-15-19     The staggering growth of the transformation through education camps since 2016, sheer numbers incarcerated, detention of inmates’ children in orphanages and fears of organ harvesting were highlighted by former President of the Canadian Uyghur Society, Ms. Turdush, who has had no contact with her own family for two years.  Because of her advocacy work in the West, and previous employment with Washington-based Radio Free Asia, 31 of her cousins have been arrested and interned, one even dying in a camp during the past month….
Uyghur woman Mihrigul Tursunwas tortured with electric shocks to the extent that she developed seizures, and witnessed nine deaths in her own cell of 68 prisoners in a three-month period.
Ms. Turdush described the torture Uyghurs are being subjected to as not simply physical but mental and emotional, and affecting also those still living “freely” in Xinjiang, who live in daily fear of arrest.  “Whilst the Uyghur population makes up only 1.5 percent of the Chinese population, they account for 21 percent of all arrests,” she said.  “No one feels safe.”…“The aim is to break the Uyghur lineage, their roots, and connections with their culture.  Who knows what their (Uighur children forced into orphanages) future holds or whether they will be able to return?”  She described life outside the camps as one of fear and intense surveillance, and the intrusion into most Uyghur homes of 1.6 million Han Chinese cadres, sent to live with and spy on them for days at a time, added to the “horror, helplessness and mental destruction.”
Adding insult to injury, exiled journalist 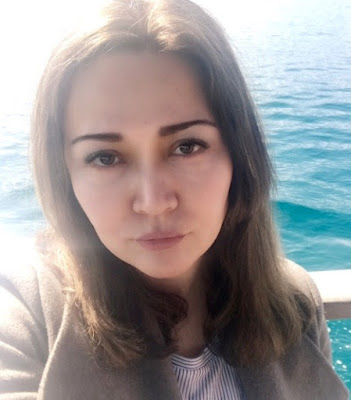 Rukiye Turdush complained that Uyghurs also felt abandoned by their co-religionists around the world, who had sold out to China for the sake of economic benefit. …“No civilized nation attacks innocent children, imprisons people like this, or makes them disappear,” she said.  “But China is doing this.”…She said the result of losing all touch with their loved ones is creating a host of severe mental imbalances and symptoms related to stress disorders within the Uyghur diaspora.  The impact on all of us is huge.  We cannot sleep, we cannot think straight and we cannot eat.  We are being tortured too,” she said.  https://bitterwinter.org/surviving-china-uyghur-voices-from-xinjiang-and-guantanamo/
........
Posted by Bob Dinn at 8:23 PM