[In the Paradise, CA fire area PG&E may well be facing $5 billion claims; we shall see.  Gov. Brown vetoed a 2016 state legislature bill (SB 1463) aimed at the utilities to make them more responsible; Gov. Brown and PG&E claim that global warming did it.  However, one can see 3 factors in the CA fire story:  a) long drought, b) high winds, and c) sparks from somewhere.]

Alex Robertson, a plaintiff lawyer who has brought cases against SoCal Edison in the past, said he plans to file 'several dozen' lawsuits this week.

Robertson told DailyMail.com that SoCal Edison could be on the hook for hundreds of millions of dollars for the fire.

The lawyer said a resident called 911 at 2.24pm on Thursday after she saw that high winds had brought down a power line in the same area where the Woolsey Fire began.

According to fire department officials, the fire was first reported at 2.24pm on Thursday at an old lab, formerly owned by aerospace firm Rocketdyne.

In an email to regulators SoCal Edison reported that just two minutes earlier, an electrical substation on the lab site tripped. The email said Edison was investigating the incident.

Photos taken from a news helicopter at 4.37pm showed the fire burning next to the substation, just 1,000 yards from the site of the 1959 partial nuclear meltdown at the lab.
The photos appear to show the source of the fire in a cluster of trees which the power lines passed through, just below the substation, backing up the neighbor's account of a fire sparked from lines downed by trees in the wind.

Robertson said he also spoke to firefighters who were on the scene that day, who confirmed the blaze was started by downed power lines.  'I spoke to firefighters who were at my neighbor's house on Friday who are from LA County,' said Robertson.  'They were up at Rocketdyne when the fire first started and they confirmed to me that it was caused by a downed power line.'

'The local homeowners were able to put it out quickly when it was just a spot fire.  So Edison was obviously on notice that this has been a problem in that area.'

Robertson said that due to California law, he only needs to prove that SoCal Edison equipment caused the fire to hold them liable for damages from the fire.  Gov Jerry Brown signed a new law in September that would make it easier for utility companies to pass on some of these costs to consumers and help them avoid bankruptcy from a series of major fires in 2017. 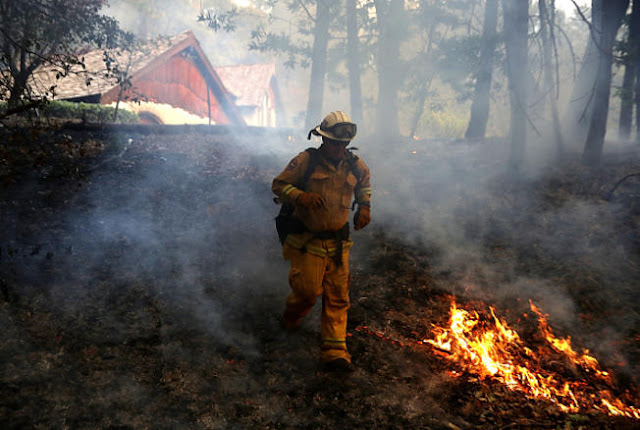 Gov. Jerry Brown signed a measure Friday allowing utilities to bill their customers to pay for future legal settlements stemming from devastating 2017 wildfires, even if the blazes are blamed on the company's mismanagement.
The bill is aimed at preventing bankruptcy or other serious financial trouble for Pacific Gas & Electric Co.  The nation's largest utility by revenue faces billions of dollars in liability if investigators determine its equipment caused the Tubbs Fire that destroyed thousands of homes and killed 22 people in Santa Rosa last year.https://www.nbclosangeles.com/news/local/New-California-Law-utilities-wildfire-lawsuits-brown-493986721.html
Posted by Bob Dinn at 8:13 PM