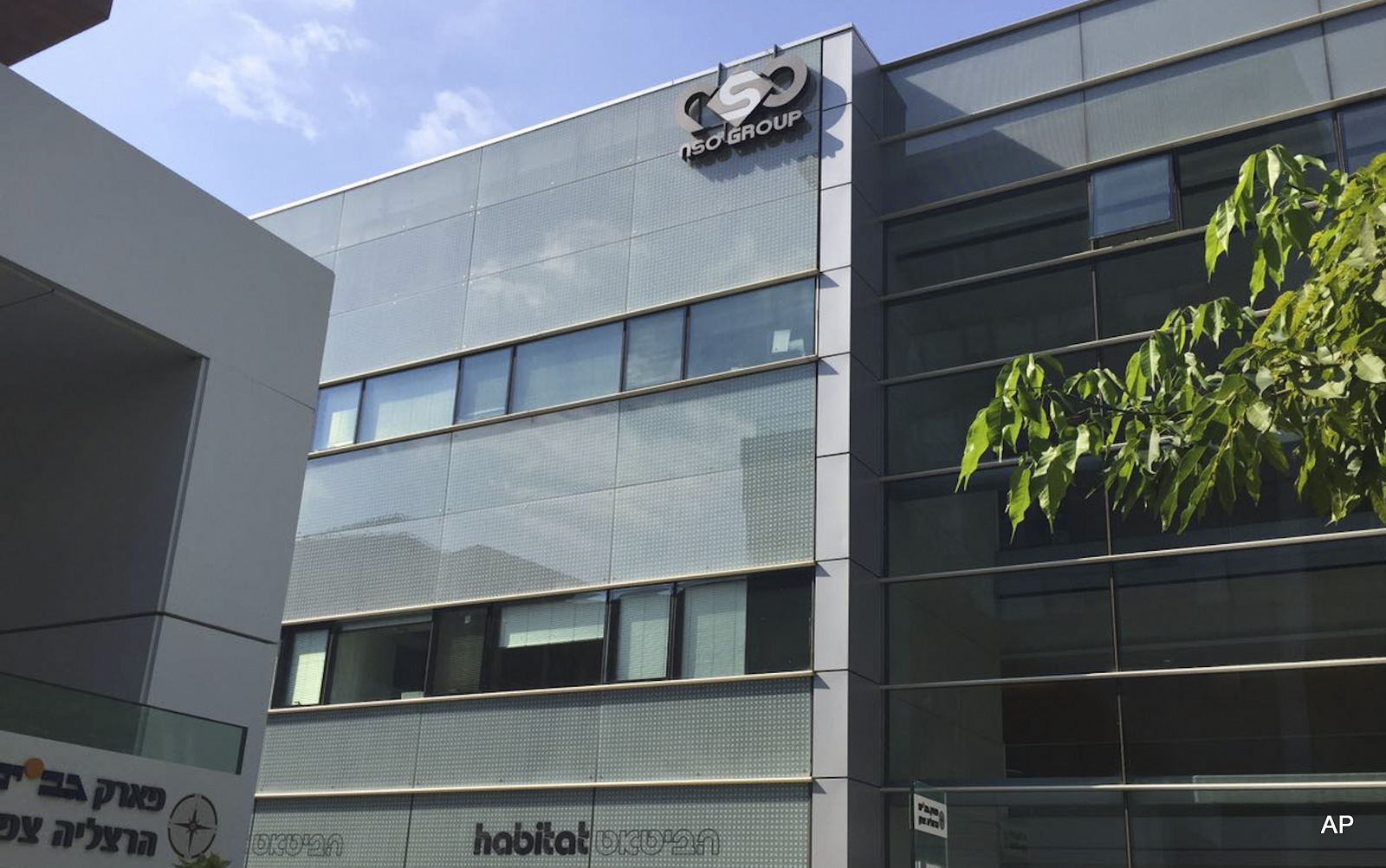 The founders are said to be ex-members of Unit 8200, the Israeli Intelligence Corps unit responsible for collecting signals intelligence;[8]    https://en.wikipedia.org/wiki/NSO_Group

Additionally a group of Canadian academics revealed last month that they had noted a “significant expansion of Pegasus usage” by Gulf states such as Saudi Arabia and the United Arab Emirates and that these governments were largely targeting dissidents and journalists living abroad.  Saudi Arabia also recently came under fire for using the software to target global human rights advocacy group Amnesty International….
Al-Jasser’s identity is believed to have been made known to Saudi authorities after a team of the cyberspies working for the kingdom infiltrated Twitter’s Dubai-based headquarters.  It remains unknown whether Israeli-made Pegasus software was involved in this particular Saudi cyberwarfare operation. However, given that the kingdom has used the program to track other dissidents and journalists, it is a likely possibility.
Beyond highlighting the misuse of Pegasus by Saudi Arabia’s government, Snowden also noted that the NSO Group’s most notorious software product was regularly used by the government of Mexico to target journalists.  The Mexican government’s use of the Pegasus software, which is believed to have begun in 2011, coincided with a dramatic uptick in the assassinations of Mexican journalists.  In 2017 Mexico was the most dangerous place in the world to work as a journalist outside of warzones due to the high number of murders.  Since then the high rate of journalist assassinations and disappearances in Mexico has continued, with nine journalists killed so far this year, making it the second-deadliest country for journalists in the world just behind war-torn Syria.  Many of those killed, including Mario Gomez who was assassinated in late September, had been murdered after reporting on government corruption.
In addition to journalists, the Mexican government has also used the software to target human rights lawyers and anti-corruption activists within the country as well as their families. According to the New York Times, Mexico has purchased at least $80 million in Israeli-made spyware since 2011….
“The NSO firm produces products which are sold to governmental officials for the sole purpose of investigating and preventing crime and terror,” the statement from NSO added.
Despite the NSO Group’s assertions, evidence has continued to mount that its sophisticated software available exclusively to governments is more often used to target dissidents and members of the press rather than criminals or terrorists.
-Whitney Webb is a staff writer for MintPress News and a contributor to Ben Swann’s Truth in Media.  Her work has appeared on Global Research, the Ron Paul Institute and 21st Century Wire, among others.  She has also made radio and TV appearances on RT and Sputnik.  She currently lives with her family in southern Chile.   https://www.mintpressnews.com/snowden-israeli-spyware-used-by-governments-to-pursue-journalists-targeted-for-assassination/251612/
…………………………………………………...........................................…
10-2-2018     According to Citizen Lab (of Toronto U.), Abdulaziz, a frequent critic of Saudi Arabia human rights abuses who fled to Canada and now studies in Quebec, had his phone infected after clicking on a link masquerading as a tracker for a package he ordered, but was actually a Pegasus exploit link.
“Pegasus would have allowed the operators to copy Abdulaziz’s contacts, private family photos, text messages, and live voice calls from popular mobile messaging apps. The operators could have even activated his phone’s camera and microphone to capture activity, such as conversations, taking place in his home,” the group said in its report.  Pegasus infects individuals by sending them text messages tempting them to click an attached link.  When an unwitting target clicks the link, Pegasus is downloaded onto the device and infects it. The software can track calls and contacts, collect passwords, read text messages and emails, record calls, and trace the whereabouts of the user.
The NSO Group has insisted in the past that it sells its software to clients on the condition that it be used only against crime and terrorism, and has shirked responsibility in cases where it was allegedly used for civil rights abuses….
The identification of Abdulaziz came after Citizen Lab said it had identified 45 countries where individuals were targeted by the Pegasus spyware by at least 33 suspected NSO customers.  It also noted a “significant expansion of Pegasus usage” in Gulf states, including UAE, Bahrain, and Saudi Arabia….
“In addition to suspected infections in Saudi Arabia, KINGDOM appeared to be actively monitoring targets in Bahrain, Canada, Egypt, France, Iraq, Jordan, Lebanon, Morocco, Qatar, Turkey and the UK,” Citizen Lab said.  It said the operator was thought to be linked to the Saudi government.  Last month Amnesty International accused Saudi Arabia of targeting its workers with WhatsApp messages containing links to malicious sites used to infect phones with the Pegasus software….
In 2016 Israel’s Yedioth Ahronoth daily first reported that the Defense Ministry had given the NSO Group permission to sell the software to an Arab company, which went on to target a prominent UAE rights activist.  But the scope of the government’s involvement had not been known.
Mike Murray, a researcher with Lookout, a San Francisco-based smartphone security company, called Pegasus at the time “one of the most sophisticated pieces of cyberespionage software we’ve ever seen.”…


Israeli companies have been criticized in the past for selling software to monitor internet and phone communication to regimes with poor human rights records, including in Uzbekistan and Kazakhstan, as well as Colombia, Trinidad and Tobago, Uganda, Panama, and Mexico, according to the NGO Privacy International.  https://www.timesofisrael.com/israeli-spyware-used-against-saudi-arabian-dissident-in-canada-report/
Posted by Bob Dinn at 8:29 PM