You can make your enquiries to the Public Security Bureau 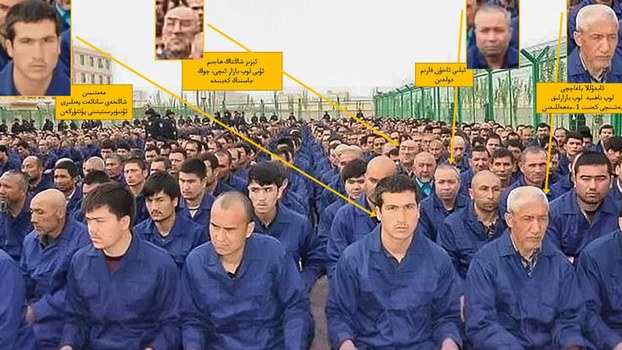 The five men in the photo are among up to 1.5 million Uyghurs and other Muslim ethnic minorities accused of harboring “strong religious views” and “politically incorrect” ideas and held in political “re-education camps” across the XUAR since April 2017.
The five men are medical equipment entrepreneur Mamtimin, restaurant and bakery proprietor Aziz Haji Shangtang, religious teacher and jade merchant Eli Ahun Qarim, woodworker Abdulla Haret, and driver Abduleziz Haji.
Mamtimin studied business management at the Shanghai University of Medicine and Health Sciences and graduated in 2012.  He attended a Chinese high school in China and was good at computers and web design.
A former classmate of Mamatimin named Nurmement, who now lives in Turkey, said he last saw his classmate in Hotan in 2012.  At the time, Mamtimin was establishing his own company to sell medical equipment.  “Mamtimin was two years ahead of me in the university,” he said.
Nurmement told RFA he is not sure why Mamtimin was sent to the camp but described him as “an independent thinker and actor.”
According to a man from Lop county who is now living in exile, Aziz Haji is an entrepreneur whose house was located behind the big mosque in the Lop county bazaar.  He used to run a restaurant on the banks of Yoronqash River.  “He used to run a restaurant, so he was given the nick name, Shangtang.  Later he opened a bakery shop. Business was very good, so he decided to expand it by building a bakery, which was completed when I was there,” said the man, speaking on condition of anonymity to avoid reprisals against his family.  “I think the reason he was arrested is that he performed a Haj pilgrimage (to Mecca in Saudi Arabia) in 2002, and they have arrested everyone who travelled abroad,” said the man.
An acquaintance of Eli Ahun Qarim described the 50-something native of Lop county’s Igerchi village as a religious student with “a profound understanding of religion” who had earlier been detained for one year for teaching religion.bb“We did jade business together around 2007-8.   Prior to that, he was learning religion in Hotan,” said the acquaintance told RFA.  “He used to preach among us, just several of us.  All of us were impressed with his religious understanding.  He had a relatively good life.  He was married and with a child.  I think he was detained because of his religious knowledge,” the man added.
Woodworker Abdulla Haret is around 45 years old and the father of three sons who had never left Hotan, according to his former neighbor.  “He fixes doors and windows.  He’s a very humble and credible person who is eager to do charitable works,” the neighbor said, adding that Haret was a caretaker at the local Shipang mosque.  “The reason for his detention is probably because of his work at the mosque.  He’s a man of faith and good character.  He has never had any arguments or problems with other people,” the neighbor told RFA.
Abdulaziz was a 50-something driver at the Lop Labor Insurance Bureau before his detention.   He had earlier been a driver for driver at the Lop County Radio-TV station, an official from the bureau said.  Married with children, Abdulaziz was expelled from work and now attending “education."
RFA made multiple phone calls to police to inquire about the men and their reasons for being detain in the camps, but most officers refused to discuss the cases.  “I am unable to tell you anything, we were told not to accept interviews from outside.  You can make your enquiries to the Public Security Bureau,” said one police officer. https://www.rfa.org/english/news/uyghur/camp-photo-04262019171258.html